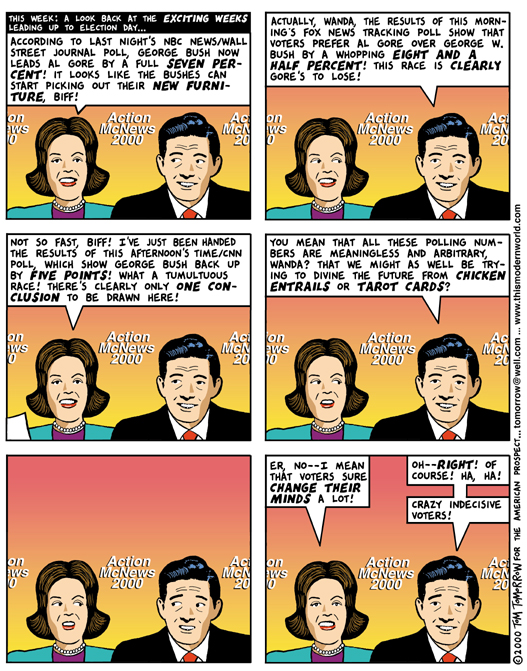 In any trend, there’s going to be a moment when you realize things are out of control. That cool little bar band hasn’t just gotten noticed — they’ve sold 20 million records and now their second album is coming out and everyone’s expecting it to be the second coming of The White Album.

And so when FiveThirtyEight brought easy-to-understand statistical analysis to the national stage in the 2008 cycle, there was sure to be a phase of irrational exuberance. When people start pretending polls are photographs of facts, not lobs at the dartboard. And that a SurveyUSA poll in July, when people’s #1 issue is how am I gonna get all this sand out of my car, that claims 97% of voters have already made up their minds might be the definition of worthless.

As Josh Marshall at TPM points out yet another example that polls are far from perfect — intentional or not, the possibility of bias at SurveyUSA:

Not quite sure what to make of this yet. But SurveyUSA’s polls this year are leaning pretty strongly toward the GOP candidates relative to most other pollsters.

What caught my eye was this result for the California Senate race which has Fiorina over Boxer by 5 points, even though all the other recent polls, including Rasmussen, show Boxer ahead by at least a few points and in some cases by almost 10 points. So for instance, the current TPM Poll Average for that race gives Boxer a 2.6 point edge. But take out SurveyUSA and the margin pops up to 5 points, which is a big difference when a lot pollsters are following this race.

In the days before the Jim Webb-George Allen contest in 2006, the final SurveyUSA poll had Webb as a lock — up 8% with only 1% undecided. Webb won by less than half of 1% of the final vote.

Polls can be horribly wrong even the week of the election. How much of a stab in the dark do you think they are in the middle of summer?