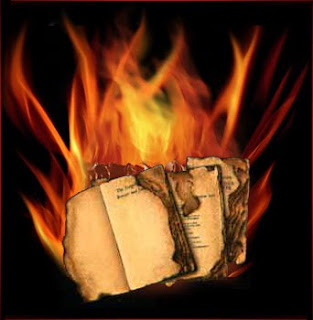 This morning, my Jewish husband reminded me that tomorrow is Erev Rosh Hashanah, the Jewish New Year and the start of the High Holy Days. Even though I am a Christian, I always go with him to Rosh Hashanah  and Kol Nidre services on the eve of the Day of Repentence, Yom Kipper. His reminder came right after I had listened to the news that Gen. David Petraus, commander of American forces in Afghanistan, had  remarked on the dangers of the proposed action by the so-called “Dove World Christian Center” in Florida to burn Korans, the holy book of Muslims, on September 11.

Petraus’ deputy, Lt. Gen. William Caldwell, spoke on CNN, saying, “We very much feel that this [action] can jeopardize the safety of our men and women that are serving over here in the country,”  Caldwell is the head of NATO efforts to train Afghan security forces.

It was Heinrich Heine who said, “Where one burns books, one will, in the end, burn people.” Is that what my country has come to, in the name of free speech by a hate-filled, bigoted “church”?

This weekend in September is sacred to many people. It is the start of High Holy Days for Jews. It also is the end of Ramadan, a month of fasting for Muslims, ushering in Eid, a festival that this year American Muslims are afraid to celebrate too openly for fear of some bigoted backlash. In addition, it is a sad commemoration  of the deaths of almost 3,000 innocents who were sacrificed to the hatred of Osama bin Laden and al Qaida operatives.

The last thing that my country should stand for is the same standard that Nazi Germany had for books that they disagreed with, the same sort of hatred and bigotry that drives bin Ladin to sacrifice innocents to his evil crusade.

If one group of Americans think they have the right to offend another group by burning their sacred books, by the same token the offended people should have the right to demand respect for their beliefs in this nation. Otherwise, a Nazi resurgence is upon us, in the guise of bigots who preach in the name of the Prince of Peace, aided and abetted by egotistical zealots who have their viewpoint aired on television news far too much.

I believe that the ironically named Dove World Christian Center is flirting with treason…and getting away with it.