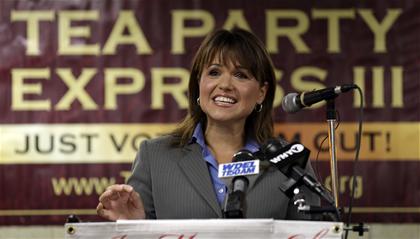 Last night’s Republican primary results, particularly in Delaware but also in other states, confirmed what many of us had been thinking for months now — the GOP has gone completely off the deep end into John Birch Society cuckoo-for-Cocoa-Puffs land.  As James Zogby writes over at Politico, “With Palin and Co. at the helm and Beck and Rush directing traffic, the GOP no longer looks like the Party of Lincoln (hell, it’s not even the party of Reagan).”

That’s an excellent point, as Ronald Reagan expanded the federal government, raised taxes multiple times (including a gas tax increase and an increase in corporate taxes), exploded the deficit, expanded Social Security, negotiated with the “Evil Empire,” etc., etc. Also, I’d point out that “cap and trade” originated in the Reagan Administration as a conservative, “free market” idea.  In today’s Republican Party, in other words, Ronald Reagan – or someone with the same views not named “Ronald Reagan” – would be ridden out of town on a rail as a liberalliberalliberalliberal.  Today, the party of Lincoln, Teddy Roosevelt, Dwight Eisenhower and Ronald Reagan has become the de facto John Birch Society — extreme, wildly irresponsible, insane. Let’s just call them the “American Taliban” Party.

Democratic consultant Peter Fenn explains it well when he writes:

Poor Republicans. They are beginning to resemble the bar scene from Star Wars. They are purging the conservative voices in their party who have any sort of pragmatic perspective and substituting true kooks. These are not just candidates with hard right views — they took over the Republican Party in the late ’70s and early ’80s — these are candidates who, as the Republican chair in Delaware put it, don’t deserve to be dog catcher. Serious ethics issues. No record of accomplishment. Little of any substance on the issues. They are, pure and simple, vessels for anger and unbridled simplicity. The Grand Old Party is fast devouring itself. Political tsunamis do wash up a lot of dead fish on the beach — it happened when Republicans captured 12 Senate seats in 1980. It appears to be happening again, only worse.

That about sums it up. The only other thing I’d add is that, although I’m happy this morning as a partisan Democrat to see the Republicans self destructing, I’m worried as an American at the future of my country.  Is having one of our two major political parties go completely off the deep end a good thing for America? I’m not convinced. How about you?

UPDATE: Another way to put it is that the Republicans “are being subsumed by the Tea Party,” and that the “mainstream Republican party is dying or already dead.”

…the Republicans thought they could co-opt [the Tea Partiers] and use their anger to fire up their dormant base. The joke is on them. Like HAL in 2000 A Space Odyssey, the master suddenly has become the slave and the Republicans have lost control of their party. They thought they had a tiger by the tail but the tiger has them now. The question is, will there be any Republicans left?

UPDATE #2: Here in Virginia, the partisan Democrat in me shouts go Sideshow Bob, while the rest of me worries for my country’s future.