George Allen will appear on Fox News’ “Happening Now” today. Leading up to the panel discussion there is an opportunity to submit questions and participate in a live chat from 11 AM to 1 PM. Allen joins at 12:30. He gratuitously pandered to the Tea Party on his website yesterday:

“I guess we were “tea partiers” before it was cool because I’ve heard it said that the TEA in Tea Party stands for “taxed enough already,” and that was certainly the stand I took as governor.” – George Allen

Allen raised over $300,000 in the most recent reporting period as he aims toward a political comeback in 2012. Damaged by using a racial slur during the 2006 campaign, his take on the current turmoil about racism in the Virginia Republican Party does not appear to be a topic at the top of Fox’s interest poll. 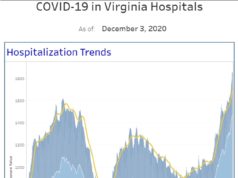 The 2021 VA General Assembly session is going to be VERY different than the 2020 session, with legislators - many of whom filed 30, 40, 50, 60 bills last year - now limited to 7 (House) or 12 (Senate) https://bluevirginia.us/2020/12/thursday-news-pace-of-climate-change-shown-in-new-report-has-humanity-on-suicidal-path-u-n-leader-warns-trump-engages-in-most-petulant-46-minutes-in-american-history-as#comment-5175512125

Interesting: @RepElaineLuria endorses @AndriaMcClellan for Virginia LG, touts her "years of experience as an entrepreneur and small business owner" https://bluevirginia.us/2020/12/thursday-news-pace-of-climate-change-shown-in-new-report-has-humanity-on-suicidal-path-u-n-leader-warns-trump-engages-in-most-petulant-46-minutes-in-american-history-as#comment-5175496450