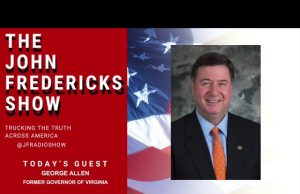 lowkell - May 16, 2019 3
Fairfax Republicans have really gone hog wild on the extremists for School Board this year. See below for more, starting with my tweet from...

lowkell - February 2, 2019 33
Think back over the past decade or two in Virginia and national politics, and consider the massively different reactions by Democrats and Republicans to...

The Worst 40 Virginia Politicos Since 2005

Barbara Comstock Reduced to Bumming Rides from Lobbyists And Fleeing from...

lowkell - May 7, 2017 5
by Lowell Here are a few national and Virginia news headlines, political and otherwise, for Sunday, May 7. France Chooses a Leader, and Takes a...

Video: Far-Right Freak Show in Leesburg Last Night – and That...

This year's version of the annual event just outside of Wakefield accomplished little. Though there was a hint of the lunacy usually present at Shad Planking; what there wasn't was much of a crowd nor interest. The biggest symbol of the times was the state-maintained road to the event.

There really wasn't much in the way of genuine politics going on. It was more of an alumni meeting than a political rally; more of a gathering of cronies practicing the Virginia Way interrupted a couple of times by a couple of hecklers. It seems that the last few seasons of rowdies have driven away the attendees who used to come show some civil revelry on behalf of their candidates. And now, with no one in any race to rally around, the most demonstrative types stayed home; and that would leave a big hole in what had become this Ruritan charity event attendance.

Additionally the candidates themselves, apparently led by the Republicans, declared a tacit truce on the sign war; they realized surrender was the better part of valor in that battle. There were a few signs along the road, but not the plastering to which we've become accustomed; maybe a dozen on 460 coming in from Richmond.

And then there was that road. We've discussed here the slow strangling that the McDonnell administration orchestrated during his four years in office in the name of balancing the budget. Well, now it is manifest here. What has been a well-maintained macadam rural route has deteriorated. In fact, the last half mile or more to the event parking area entrance and everything beyond is now feathered with gravel to cover the potholes. It really is symbolic of the treatment of Virginia's infrastructure, from schools and social programs to health care and public safety; not to mention the fraud perpetrated on the Virginia Retirement System when McDonnell announced that the unfunded obligations had been resolved.

There is more to discuss about what was less and that will come in a subsequent post. But if this level of enthusiasm is any indication of the turnout for this fall's election, the margin will come down to the grassroots get-out-the-vote effort. Problem is, for both sides, yesterday showed the grassroots really haven't been fertilized.

George's handlers have found their perfect messenger. It doesn't matter if he understands the message; just that he can stay on message. Allen is an empty vessel who'll do and say whatever it takes to play. But even with a tighter muzzle, they can't shield the lack of intellect.

Napoleon used his Corporal as a sounding board for his orders. If the man could understand what was conveyed, Napoleon assumed it interpretable by his subordinate commanders. George Allen, in his charade as a Reagan Ranch Presidential Scholar, is rolled out to deliver Madison Avenue tested bromides. In front of his paying audiences (asking price: $20,000 per appearance), there is little threat he might be called out and even less chance he'll address any objection that his arguments are flawed.

But on the campaign trail he leaves a record of his disregard for fact. No matter the amount of rote drill he is given, he cannot escape evidence that discounts his arguments without a practiced duck and weave. "See me afterwards and let's talk," is his routine way of setting aside any question that doesn't conform to dogma.

At a spring appearance during the Republican primary campaign for his old Senate seat, one of the economic prescriptions featured today in the Richmond Times Dispatch rundown of the Allen plan was challenged. Allen wants to cut the corporate tax rate from 35 percent to 20 percent.

Allen's primary argument then was that the rest of the world has a rate in the area of 20 percent and we had to be competitive. A CPA in the audience, who was clearly a frustrated Allen supporter, pointed out that the last time this was tried, when Reagan reduced the rate from 50 to 35 percent, the rest of the world taxed at around 35 percent and responded to our reduction by dropping rates to the now prevalent 20 percent. Allen could have learned a lesson about markets if he'd listened or had the requisite intellect. Instead he put off the man with his standard and his handlers re-crafted the message. Now he uses hiring and investment as the rationalization despite the fact taxes don't really factor into those decisions. There really isn't a high bar for a Reagan Presidential Scholar.

Posturing, Polls, and the October Surprise

Barring any unforeseen event, there aren't enough undecideds to sway these uncertain elections. Persuasion is over now. The embers are being fanned with advertising dollars, but the electorate is now fairly immune to the heat from either side. The negative ads won't do the heavy work of GOTV.

The tea leaves from the polls give a very murky outlook. Republicans told us weeks ago that the polls are unreliable and biased. They were certainly not giving the news that they wanted to hear. For a while they were apoplectic; then curled up in the fetal position. When the polls swung their way, they suddenly became prophetic. But the truth is we (except maybe Nate Silver) won't know what they mean until midnight Tuesday.

The benefit of the ad deluge right now is nearly zero compared to ads run in June or July. Dr. Quentin Kidd (Christopher Newport University) suggests that was factored into the strategy of the Obama campaign. The campaign had ads up at that point in all the swing states because they wanted to set the stage early. Everyone knew that by fall the ads would be ubiquitous to the point of being indistinguishable. This strategy may prove the difference in this race.

In a conversation with Cathy Lewis on WHRV last week, Kidd concurred with the view that we have reached the point of political ad saturation. But, he said, we are in an arms race from which no campaign can pull back without demonstrating some sort of weakness; suggesting maybe the financial support has gone (see George Allen's contribution to himself). And just today a very expensive 20 page, glossy, Obama mailer arrived from OFA.