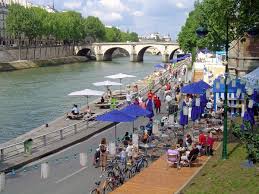 Ahhhh, France in summer: lazy evenings sipping wine and eating great food at Parisian cafes, perhaps “a lovely picnic at one of the Castles of the Loire or biting into a juicy slice of Cavaillon melon?” Or, there’s always the “[m]edieval stoned villages, rolling hills covered in vineyards, fresh pate and a gorgeous river valley” of Dordogne; a spectacular fireworks display at “the world’s most famous and iconic Medieval walled city, Carcassonne;” hanging out on the Paris Plage, where you can “enjoy cocktails at the open-air bars or work on their tan on the chaise longues.” Just a few ideas for what to do when you’re in France this summer on your all-expense-paid, $10,000 trip!

So how, you ask, do you get one of these amazing, albeit extremely expensive, trips to France en été? Very simple: run for, and win, a seat in the Virginia General Assembly! I’m not kidding — check this out:

More than a dozen Virginia legislators are flying to France this month on all-expenses paid trips as part of an aggressive lobbying effort by a company pushing lawmakers to lift a ban on uranium mining in the state.

Virginia Uranium invited nearly all 140 state lawmakers to France as it looks to mine what is thought to be the largest deposit of uranium in the United States, in south central Virginia, despite concerns about unearthed radioactive material that could contaminate the area’s land, air and drinking water.

Five legislators arrived in Paris on Wednesday to see a closed mine in Bessines, in western France, where uranium was excavated for 50 years until the late 1990s. Nine others leave Tuesday on a five-day trip – expected to cost $10,000 a person – that includes about three free days in Paris

That’s right, this company is willing to spend $10,000 each for 140 Virginia legislators — $1.4 million total — in order to…uh, assist them in making the “right” (ahem) decision on uranium mining in Virginia.

Put aside the specifics of this issue, whether or not you agree with uranium mining in Virginia, because that’s not really the point. What is the point is very simple: as much as legislators claim they can’t be bought, can’t even be influenced, etc., this is a classic case of how corporations are attempting to purchase our Democracy, both here in Virginia and across the country. Recently, I attended a forum on the egregious “Citizens United” Supreme Court decision, which rubber-stamped and accelerated the takeover of America by the corporations, of the corporations, and for the corporations. Here in Virginia, sadly, it’s been that way for a long time, as there are essentially no limits, other than disclosure, on corporate giving to our lawmakers, lobbyists wining and dining them, you name it. Does that make you comfortable?  If so, why?  Personally, it makes me extremely uncomfortable – and angry! Is this really what the Founding Fathers intended? Is this what Abraham Lincoln intended? Is this what our ancestors fought for – and in some cases died for – in World War II and throughout the Cold War?

Fortunately, there remains one check-and-balance on this egregious situation — public outrage and disgust. Thus, as the Washington Post article points out, “Most legislators declined the pricey jaunt – the second invite from the company in two years – months before the fall election.”  Wise move, especially at a time when hundreds of thousands (millions?) of Virginians are out of work, underemployed, “underwater” in their mortgages, or otherwise struggling to get by in this tough economy.

In that environment, Virginia lawmakers – most of them, anyway – are smart enough to realize that jetting off on a $10,000 all-expenses-paid junket to France isn’t exactly the message you want to be sending. Especially when that junket is financed by a wealthy, powerful corporation with business before you! Can we say, “massive conflict of interest?”  Can we say, as the otherwise deplorable Del. Dave “Abuser Fees” Albo (R-Owned by Corporate Money) correctly calls it, “the appearance of impropriety?” Or, as Del. Mark Sickles (who made the correct decision in turning down the money) puts it, “It could appear to be extravagant.” Like a couple bottles of Pernod-Ricard Perrier-Jouet champagne (about $10,000, the price of the uranium-funded boondoggle to France, for 2 bottles), perhaps?

The question is, what on earth are the legislators who accepted these trips thinking exactly? I mean, I can understand Republicans like John Cosgrove and William Janis — that’s what these guys do, after all. And I can understand ethically challenged (to put it mildly) Democrats like Del. Lionel Spruill, who last we saw in 2009 taking huge wads of money from Brian Moran’s and Jon Bowerbank’s 2009 campaigns for Governor and LG to do…god knows what for them (actually, last we saw Spruill, he was ranting and raving incoherently about not losing his soul by voting for an atheist, Democratic Congressional nominee Wynne Legrow, and abandoning his buddy, Republican Congressman Randy Forbes).

But what about the others listed in the Post article, including several progressives? I can’t wait to hear their protestations about how they are personally immune to $10,000, all-expense-paid trips to France, what with their pure moral code and all. That must be why this company feels it’s worth it to spend $10,000 a legislator, because they know it has absolutely no chance of succeeding and it’s a total waste of their money. Because we all know that corporations are in business to give away money, for no purpose whatsoever, and…oh forget it.

And here we have exactly the type of Republican that @RepRiggleman is talking about when he refers to the "manic fringes" of America...yep, that would be @NickForVA https://bluevirginia.us/2020/11/rep-denver-riggleman-r-va05-time-for-a-gop-that-represents-the-core-of-american-not-the-manic-fringes#comment-5169604652 h/t @grantxfox