Democrats need a pro-jobs strategy, not merely a debt ceiling extension deal, especially since it is likely to be on GOP terms. Last December, I thought Senator Warner floated a very interesting idea, consistent with the Webb-Warner bill  which had Eric Cantor’s support (although in a different version on the House side.)

The Webb-Warner bill, SB 2970, used tax credits to potentially create a million jobs around the country, while at the same modernizing our failing school infrastructure, among the oldest in the world, especially hurting kids in rural areas, inner city neighborhoods, and older suburban towns. Two major schools have studied the use of “historic” tax credit financing to fix our oldest buildings, concluding it works and it actually reduces the government bonded debt now piling up. We have a 26-year history of success. But a bureaucratic rule has prevented its use to modernize the 10,000 school fixing projects that would otherwise qualify, all funded by private enterprise, not one borrowed government dime.

Building on their bill, Senator Warner went further at the end of last year, advocating a large package of tax credits aimed at job creation in key areas, balanced off with a scaling back of other credits presumably ones he felt were less effective in creating jobs. The idea didn’t get the kind of reception needed to take it to the next level of specificity as the Bush extension had already been agreed to by the White House.

Why not run it up the flag pole now?

As I say: SB 2970 is just one specific idea, basically requiring a technical change in the law to overcome a bureaucratic rule that increased the cost of schools by 33% in Virginia!, led to trillions of dollars in unnecessary government bonds and saddled poor and middle class children with poor dysfunctional school facilities. I can think of several other specific job ideas. Senator Warner has far more, as do Republicans; the bipartisan support is large.

They don’t increase the deficit or the debt: for example, in the case of SB 2970, the Webb-Warner bill actually takes an overly generous subsidy used by Wall Street and instead gives a fairer one to Main Street and local business entities. Tim Kaine and George Allen both back it!

My bet: Warner can shine right now by switching from one of many voices on debt reduction to one of the few remaining advocates of strong job creation. A debt ceiling extension approach to job creation is problematic in the short term.

Hello! The election is in 2012, and voter’s view of the economy will be set roughly 12 months from now. Warner’s targeted job-creation tax credit strategy isn’t perfect, and it will take a few months to gear up. But the right mix of incentives should draw broad support and will reduce the debt and deficit. The school part alone might translate into $100 billion in new economic activity over the next few years.

He shouldn’t worry about the cold reception a few months ago; it was an idea ahead of it’s time. I got a call from a top economist last week, one of the most quoted in the nation. He liked the idea. Warner may have a lot more silent supporters than he realizes. If he and Webb can get the President to see the wisdom of it, they might turn out to be heroes in a nation looking for them. 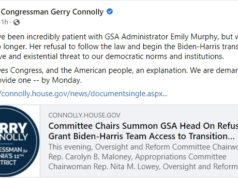 Rep. Gerry Connolly (D-VA11): “We have been incredibly patient, @GSAEmily, but we can wait no longer. “