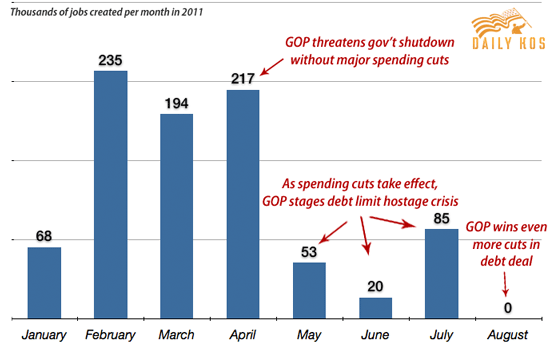 For more on how Teapublicans killed the nascent Obama/Democratic economic recovery of 2009-2010, see here and here. Also, as Steve Benen points out, “When the jobs reports were looking quite good in the early spring, Republican leaders were eager to take credit for the positive numbers they had nothing to do with.” And now that the jobs numbers aren’t looking so good, in large part due to the climate of uncertainty that the Republican’t complain about but that they themselves mostly created?

And, of course, tax cuts for rich people and corporations, combined with cuts to crucial programs for the other 99%, are ALWAYS the answer to everything in these people’s bizarre ideology. And yet tens of millions of Americans keep voting for these wildly irresponsible, dishonest failures? Perhaps we really do get the government we deserve?

Really striking from this a.m.'s VA House Approps meeting how much federal stimulus $$ is flowing into Va. - "more than $7.4 billion for Virginia and its localities" - and all in one "tranche" this year! Where are they going to spend it all? Stay tuned... https://bluevirginia.us/2021/06/wednesday-news-the-delta-variant-presents-a-grave-danger-democrats-vow-long-march-toward-voting-rights-reforms-how-joe-manchin-could-be-the-guy-who-saved-the-filibuster-and-the-senate#comment-5430949283

Big changes in "TJ" admissions diversity: 1) students from historically underrepresented schools up from 5.6% to 30.7%; 2) economically disadvantaged students up from 0.6% to 25.1%; 3) female students up from 41.8% to 46.0%... https://bluevirginia.us/2021/06/wednesday-news-the-delta-variant-presents-a-grave-danger-democrats-vow-long-march-toward-voting-rights-reforms-how-joe-manchin-could-be-the-guy-who-saved-the-filibuster-and-the-senate#comment-5430897987 h/t @AnnaLysaGayle