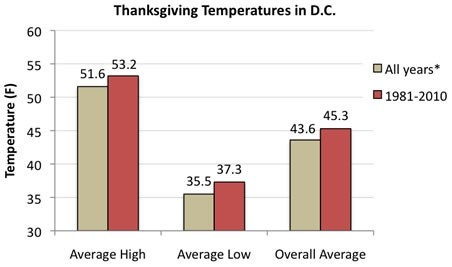 As the Capital Weather Gang reports, climate change is bringing warmer Thanksgivings to the DC region:

Data from the last 30 years indicate that D.C.’s average high temperature on Thanksgiving has inched up to 53.2 degrees, with an average low of 37.3F and an overall average of 45.3 degrees. On each count, this represents an increase of about 1.6 to 1.8 degrees Fahrenheit compared to the overall averages listed above.

At first glance, it might seem flawed to compare Thanksgiving temperatures from the 1981-2010 period to the historical average. Prior to 1939, Thanksgiving sometimes occurred as late as November 29 or 30, which would favor tilting the overall averages toward lower temperatures. Interestingly, however, when all outlier years are removed (i.e. the 21 years when Thanksgiving fell on dates other than the standard November 22-28 dates), the temperature averages remain identical to those in the complete 139-year record.

The implication is that even when we account for the later Thanksgiving dates in the past, Thanksgiving still appears to be trending slightly warmer, which is consistent with other temperature increases seen in D.C.’s new climate normals.

A small increase in temperature may be barely discernible to humans … but it’s great news for pests that can increase their range with less worry about winter frosts. As a recent National Wildlife Federation report detailed, warmer winters temperatures are great news for Lyme disease-carrying deer ticks, painful fire ants, and tree-killing bark beetles.

With Days To Go Until Their Convention Of Chaos, Virginia GOP Is In Shambles (“But it has been successful in one sense: it’s shown Virginians the GOP’s true colors") https://bluevirginia.us/2021/05/with-days-to-go-until-their-convention-of-chaos-virginia-gop-is-in-shambles