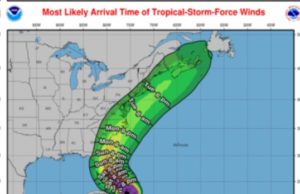 Andy Schmookler - November 3, 2018 0
I admit it. It increases my stress to read the weather forecast for the U.S. on Election Day. "Storms are forecast in some of... 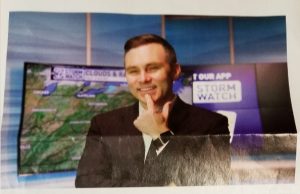 Yet ANOTHER Reason Not to Watch Sinclair-Owned WJLA-TV 7: Chief Meteorologist/Climate...

lowkell - June 5, 2018 4
I happened to see the current issue of Arlington magazine lying around the gym, and since I had nothing better to read, I picked...

Climate Deniers, Super Typhoon Haiyan Is Looking At You One year after superstorm Sandy became the largest Atlantic hurricane on record, Super Typhoon Haiyan just became the strongest landfalling tropical cyclone on record, hitting the Philippines with sustained winds of 190-195mph and gusts to 235mph. That's as strong as a top-of-the-scale EF-5 tornado ... except Haiyan's eye is eight miles wide.

Why is the storm so historically strong? NOAA blames warm deep water. When climate science deniers claim a global warming "pause," the heat isn't missing - it's right there lurking in the ocean, waiting to put super typhoons on steroids. Predictions that a major El Niño warming event - and the coming solar maximum - would help make next year the warmest on record now seem wide of the mark. All eyes will probably be on the Arctic instead. Some say the record loss of sea ice in summer 2012 was a one-off, others that it was the start of a runaway collapse. If the latter, summer sea ice could virtually disappear as early as 2016. What is certain is that the ice reforming now will be the thinnest on record, priming it for destruction next summer. [...]

Research in 2012 implicated the fast-warming Arctic in a slowing of the jet stream. This is bringing extreme weather to mid-latitudes, including prolonged cold spells in Europe, Russia's 2010 heatwave, and record droughts in the US in 2011 and 2012. Watch out for more weird weather in 2013.

Learn more about how global warming is fueling extreme weather.

Heating of Pot No Reason for Alarm, Reports Frog Media

It's not true that if you slowly turn up the heat, a frog won't notice that his surroundings are getting hotter - the frog will jump out of the pot if he can. That's an allegory - but whether humans will recognize & respond to their warming climate is a very real & open question.

Reading these stories, I can't help but think of Collapse: How Societies Choose to Fail or Succeed

by Jared Diamond. Past dominant societies have proved quite capable of blissfully ignoring all evidence of impending doom. So far, America's media is proving no different. Will 2012's record temperatures and extreme weather change that? Or be just another milepost on the road to disaster? The temperature at National Airport hit 104 this afternoon according to the Washington Post's Capital Weather Gang. "We are now experiencing D.C.'s hottest June temperatures in 142 years of record-keeping," says CWG's Jason Samenow.

With the dew point at 70 degrees, it feels like 111 degrees right now. How fast is global warming rewriting our temperature records? The old June record was just tied last year, a 102 degree day on June 9, 2011. (Globally, 2012 has been nearly a full degree above the 20th century average.)

At 101 degrees, Roanoke is having its hottest June day in 53 years & overnight had its hottest "low" ever at 82 degrees. Richmond has already tied its all-time high for June 29th & it's possible it could break the record. It's 97 right now in Hampton, two degrees above the forecast high but still short of the record for the date (100 degrees).

TheGreenMiles - June 2, 2012 1
From Hampton to Richmond to DC, severe thunderstorms, flash floods, and even tornadoes have swept across Virginia tonight. As of 9:45pm, Dominion reported about 26,000 customers without power, mostly in the Richmond area.

What are you seeing where you live? Share stories, pics & clips in the comments. With the DC area having its warmest spring on record breaking the old mark by a jaw-dropping 7/10th of a degree, WJLA Meteorologist Bob Ryan says anyone still waiting for "certainty" before supporting climate action is similar to someone ignoring a tornado siren:

Rather than minutes or hours, Americans in the possible path of a hurricane have to make a decision. Days ahead.  Do I evacuate? Do I believe the forecast? There is that cone of uncertainty . . . do I take a chance? Is the science of hurricane forecasting, "settled"? Again of course not, but decisions, human and economic decisions affecting sometimes millions are made, knowing the exact outcome is uncertain.

Supposedly the great Yogi Berra said, "It's tough making predictions, especially about the future". However, we make decisions every day about some prediction whether it is the traffic during rush hour, canceling a weekend picnic or headed with my family to a shelter when I hear a tornado siren.

TheGreenMiles - April 10, 2012 0
How has 2012 rewritten America's temperature records?What was scariest about March was how many cities in so many parts of America were so far above their historical averages and absolutely obliterated their records:While Europe and much of Asia have been colder than usual this year, it's not enough to offset the global trend. January-February were 0.67 degrees above the 20th century average and the 20th-warmest on record globally. NOAA has been unequivocal that global warming is fueling the trend. Have your local meteorologists been willing to point out that fact? And do your elected officials know it's time to act?
123Page 1 of 3