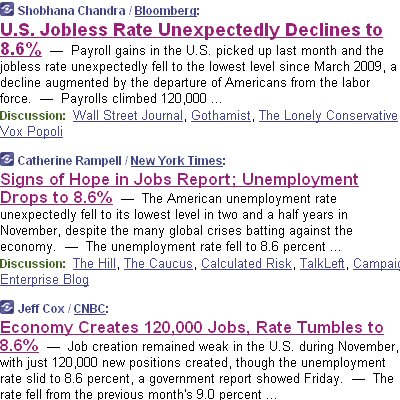 In a positive sign for President Barack Obama, the unemployment rate surprisingly dropped to 8.6 percent in November – the lowest in two-and-a-half years – as the country’s long-stalled economy flashed new signs of strength amid uneasiness about a broader global downturn.

The big dip in unemployment from 9 percent in October occurred even though the Labor Department reported Friday that just 120,000 jobs were added in November, a figure roughly in line with expectations.

Unemployment now stands at its lowest level since March 2009 – a clear political plus for Obama but something of a mixed bag considering 13.3 million Americans are still jobless and the sovereign debt crisis unfolding in Europe could tip the world into a recession.

Yes, clearly there are still a lot of problems. And why is that? Well, first of all, President Obama and the Democrats inherited a hell of bad situation from Bush/Cheney/etc. in January 2009. Remember, at that time, the economy was in free fall, unemployment was surging, the budget deficit was projected at about $1 trillion (BEFORE the “stimulus,” let’s note for the record), the auto industry was in danger of collapsing, etc. Since, then, Democrats have managed to at least stop the hemorrhaging, and even to get things going in the right direction. No thanks whatsoever – don’t believe me, review the record on this – to Republican’ts. That’s just a fact.