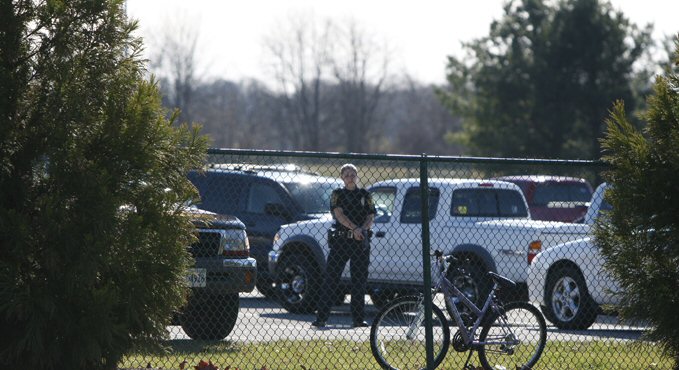 Virginia Tech officials say a police officer and another person have been shot and killed on the school’s campus. The suspect remains on the loose. They believe the suspect is still armed, CBS affiliate WDBJ reports.

A news release from the school says the police officer had pulled someone over in what was a routine traffic stop Thursday. The officer was shot and killed during the traffic stop.

Witnesses told police the shooter ran toward a parking lot on campus. A second person was found dead in that parking lot.

Virginia State Police will be taking over the investigation, according to the news release. The FBI has two officers from the Roanoke office on scene at Virginia tech, CBS News had learned.

A campus-wide alert tells students and faculty to stay inside and lock doors.

See here for updates from Virginia Tech’s newspaper, the Collegiate Times (site down right now, they say they’re trying to get it back up shortly). Stay safe everybody, and let’s hope they catch this guy fast!

P.S. As ArlNow points out, needless to say, this “conjures up bad memories of the 2007 shooting spree that claimed 33 lives.”