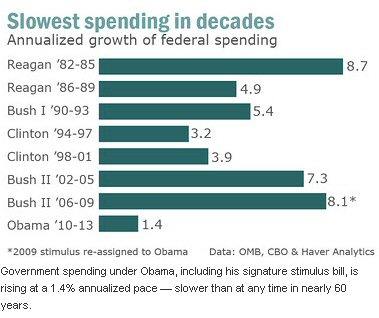 Of course, this “out of control spending” meme was utterly devoid of factual basis from the beginning, but that didn’t stop the Teapublicans and their useful idiots in the corporate media from repeating it ad nauseum. For anyone who cares about that little thing known as “reality,” though, the facts are these:

Although there was a big stimulus bill under Obama, federal spending is rising at the slowest pace since Dwight Eisenhower brought the Korean War to an end in the 1950s.

…Over Obama’s four budget years, federal spending is on track to rise from $3.52 trillion to $3.58 trillion, an annualized increase of just 0.4%.

There has been no huge increase in spending under the current president, despite what you hear.

So why do we have such a big deficit? Very simple: President Obama inherited the historically LOW Bush tax rates, the two unpaid-for wars, an economy in free fall (since recovered, but not all the way yet). Then, Obama cut taxes even more, to something like 95% of Americans, in the “stimulus” passed to help get us out of the economic disaster inherited from Bush et al. Other than the “stimulus,” though, “spending under Obama is falling at a 1.4% annual pace – the first decline in real spending since the early 1970s, when Richard Nixon was retreating from the quagmire in Vietnam.” So much for the brain-dead Teapublican “out-of-control spending” meme. It’s false in every way, and if the media had any brains or integrity, they would have been reporting that for 3 1/2 years now. Sadly, they don’t, so a lot of people bought the “big lie,” but that doesn’t make it any smaller of a lie.