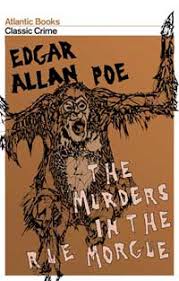 Had he been alive today, it is likely that Edgar Allan Poe would have set his famous detective novel, The Murders in the Rue Morgue, on The Lawn, or perhaps in the Rotunda. The current turmoil at Mr. Jefferson’s University – which was in its infancy when Poe enrolled for that fateful first and only year – has seen a mounting body count.

First President Teresa Sullivan. Then a respected Engineering Professor. Now comes the sudden resignation of Vice Rector Mark Kington. Not murders of course, or dead bodies in the literal sense. But Poe could have used literary license to weave his tale.

As we wrote yesterday, the Body Count has been an education for Professor Sabato and the pro-Sullivan forces.

And as we wrote yesterday, winners today can become losers tomorrow; with the sudden resignation of the Vice-Rector, it is also turning into an education for Ms. Dragas and her anti-Sullivan posse.

“How many deaths does it take ’til we know that too many people have died?” asked then-unknown folk singer Bob Dylan in his most famous protest song. The answer: A few more, Mr. Dylan, a few more at least.

How many bodies will eventually find their way to the modern day Rue Morgue? The sudden decision of the Vice Rector – the key ally of Ms. Dragas in the purge of President Sullivan – has changed the political and educational equation.

As we wrote yesterday, he and Ms. Dragas were “all in” in terms of purging Ms. Sullivan. They were prepared to die at the Not-So-OK Corral shootout. Rhey won that fight. But the cost of the war may only now begin to dawn on them.

The Vice Rector’s resignation makes it clear he realized the “rent was too damn high,” as the saying goes. His continued presence on the UVA Board, in other words, was a lose-lose proposition.

So, Mark Kington did the honorable thing and resigned. The Governor has the option of not accepting his resignation. But there is no reason to believe that will happen.  Which means the situation today stands as such: If firing Sullivan was the right thing to do, then it follows logically that one would want to keep those who did the right thing running stuff.

Clearly, the Vice Rector’s resignation concedes that firing Sullivan was not the right thing to do. It doesn’t take Edgar Allen Poe to figure that  one out.

The Vice Rector’s resignation also highlights the politics of the situation for Governor McDonnell. Specifically, how does McDonnell justify keeping those who made the wrong decision in charge of the state’s flagship public university?

This increases the chances that Ms. Dragas is now doing a female impersonation of Sean Penn as Dead Woman Walking. It likewise suggests other members of the Board should do the honorable thing and follow the Vice Rector’s example. Again, the Governor doesn’t have to accept the resignations.

Had Ms. Sullivan fought for her job – as I discussed yesterday – then she might be in a position to get it back; indeed, she WOULD have gotten it back. But she didn’t fight for what she said was right. When you are afraid to go “all in”, then you generally lose, even when you were in the right, assuming your opponents are willing to risk it all.

With the Governor on the sidelines, so many members of the current board badly conflicted, and the need to find a new permanent President able to bridge the existing gaps, this is classic situation where a few skilled new players can gain a huge advantage and a sterling public image.

These new figures can be old faces too; the newness is based on the fact they were not high profile previously in this particular fight.

In that regard, the political advantage rests with those on the Sullivan side of the divide right now, particularly following the Vice Rector’s resignation. Two talented women locked in a battle that, in the end, might cost them both their jobs.

Surely there is an HBO movie here somewhere. Or a new Edgar Allan Poe living on the Lawn at UVA, writing the poem right – or a detective novel, as the case may be – as we speak…