It’s not true that if you slowly turn up the heat, a frog won’t notice that his surroundings are getting hotter – the frog will jump out of the pot if he can. That’s an allegory – but whether humans will recognize & respond to their warming climate is a very real & open question.

Reading these stories, I can’t help but think of Collapse: How Societies Choose to Fail or Succeed

by Jared Diamond. Past dominant societies have proved quite capable of blissfully ignoring all evidence of impending doom. So far, America’s media is proving no different. Will 2012’s record temperatures and extreme weather change that? Or be just another milepost on the road to disaster? 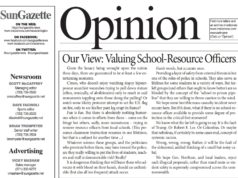 Del. Hala Ayala: My Experience Is Exactly Why I’m Running for Lieutenant Governor

In fact, the real question is how big a margin Biden wins Virginia by this November...6 pts? 8? 10? greater than 10? https://bluevirginia.us/2020/08/wednesday-news-blast-rocks-a-lebanon-already-on-its-knees-yosemites-it-is-what-it-is-mainstream-media-stop-admiring-good-interviews-and-reform-your-approach-supreme-court-of-vi#comment-5019643487

BREAKING: @arlingtondems vote by large majority (68.7%) to take a position and by an even larger majority (78%) to oppose the Virginia redistricting amendment https://bluevirginia.us/2020/08/senators-ebbin-favola-and-howell-argue-for-the-redistricting-amendment-here-are-two-rebuttals#comment-5019637755 @chrisambr @cragghines

Tuesday News: “‘Congress’ Is Not Flailing. Republicans Are.”; “The Unemployed Stare Into the Abyss....

Monday News: “Despite chilling warnings, Trump has no plan”; “Trump and the GOP are...