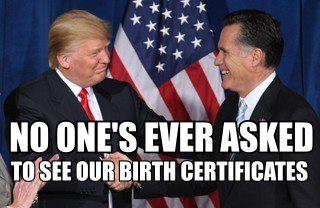 …who today in Michigan said “No one has ever asked to see my birth certificate.”

Besides the fact that is beyond despicable as a political tactic, it does require a response.

Yes, Mitt, we know you are the son of a honorable man, who when he was running released 13 years of tax returns.

Who when questions by a reporter why he had not availed himself of every possible deduction was straight forward in saying he did not think it was proper –  which of course disqualifies him by your judgment, since you think anyone who does not take every tax break is not qualified to be President.

We knew your father.  He was an honorable man.  It is hard to see how you are his son.

That said, we don’t need to see your birth certificate.

We do ask, nay DEMAND, to see your financial records, your tax returns and all appropriate schedules for at least the period of time since you have been running for President.

You made that decision in 2005, when you decided you were not going to run for reelection as Governor of Massachusetts.

If you want to convince us, you need to be transparent.

Now it is your turn.

You need to have all that tax information posted online.

Otherwise you can expect to hear the following in return to the words you offered today in Michigan:

“The American people know my finances, because I made my tax returns publicly available, without being asked.  I have nothing to hide in my tax returns.”

Your turn, Mr. Romney.   Or are you in fact hiding things that would disqualify you in the minds of the American people, as your statement today morally disqualifies in the minds of some of us already.