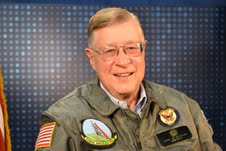 Things are starting to get interesting in the 5th Congressional District, formerly represented by the superb Tom Perriello (D), but now pathetically misrepresented by empty suit and corporate tool Robert Hurt (R). Recently, the campaign of retired Brigadier General John Douglass (D), the Democratic nominee in the 5th this year, called out Hurt on the issue of uranium mining, accusing Hurt “of standing to gain financially from a controversial uranium mining project proposed for Southside Virginia,” and pointing out that Hurt’s father “stands to make millions and millions of dollars” from the uranium mine.

Apparently, that hit a nerve with Robert Hurt’s people, including Hurt’s favorite shock jock, Rob Schilling, who basically blew a gasket on his radio show recently. If you can stand it, check out Schilling’s tirade. But first, be warned: this is just as hateful and ignorant as Rush Limbaugh, but without Rush’s charm, wit, or intellectual honesty (ha).

If you can’t tolerate listening to this trash, I’ve transcribed from around 16 minutes in, as Schilling rips into Douglass.

…there’s this coordinated effort in Virginia…where the Democrats in moderate to conservative districts are running people like that empty uniform John Douglass and other former military people as Democrats – they should be embarrassed but they’re obviously brainless…let’s put in a military guy there so that we trick people into thinking that he’s a conservative Democrat. And from what I’ve heard of Douglass, the empty uniform, the chickenhawk, who refuses to come on this program or even acknowledge receipt of emails inviting him here…He’s scared, he’s frightened, his people won’t respond to me, I’ve sent them probably half a dozen emails, never hear back from them…yeah, he’ll fight for us, the chickenhawk who’s too scared to come on the Shilling Show, a Brigadier General…he’s afraid. You know, the reason he’s afraid – and maybe he’s a really nice guy, I don’t know, I’ve never met him personally – but he’s a dupe, and he stands for absolutely nothing. I’ve analyzed what he’s had to say in some of his quote unquote speeches here locally…and he spouts nothing but platitudes, he knows nothing...[Douglass’ slogan] “Helping Virginia Families”…means I’m going to steal from the “millionaires and billionaires”…I don’t want him stealing from somebody else to give to me…what a crook.

Keep in mind, Robert Hurt visits this Limbaugh-wannabe’s show monthly, but of course avoids doing public, townhall meetings in his district (Tom Perriello did hundreds) or debates, because he’s a nincompoop and he knows he’d get eaten alive. Also keep in mind that Hurt’s buddy Schilling just happened to launch this smear-fest against Gen. Douglass right after Douglass called out Hurt on the uranium mining issue. Coincidence? You decide.

Anyway, I think we can all agree that Schilling’s comments were outrageous and completely out of line. Of course, that’s what right-wing shock jocks do, so it’s not a big surprise or anything. What’s truly disgusting, though, is Robert Hurt’s (or his campaign folks more likely, as Hurt’s probably not smart enough to figure this one out) obvious calculation that he can let Schilling do his dirty work for him and come out smelling like roses himself.

Well, for our part, we take Hurt’s failure to condemn Schilling’s slanderous, Swift Boat-style remarks against an honored, decorated veteran who served his country with distinction for many years, as tacit approval. Also worth pointing out is that Hurt and Schilling are in complete disagreement with Ronald Reagan himself, who knew John Douglass well and even asked him serve in his White House! Gee, who knew that the great Ronald Reagan – isn’t he the Greatest President Ever to right wingers like Hurt and Schilling? – enjoyed surrounding himself with “chickenhawks,” “dupes,” and “crooks.” Fascinating, isn’t it?

Bottom line: Schilling’s remarks were an insult to every veteran in Virginia, of both parties. Just as bad in some ways, these are the type of nasty smears that have a chilling effect on good people from seeking office, and on our politics in general. Partly as a result, we’re left with career politicians like Robert Hurt, empty suits who put corporate interests (as well as hyper-partisan considerations) ahead of the people’s interests. I mean, just listen to Schilling actually MOCKING the concept of helping Virginia families. Only in right-wing loonytoons land, I guess — but still, wow, it’s just appalling.

The best response to this garbage? Help Gen. Douglass fight back, by volunteering, donating, and of course voting for him in November if you live in the 5th CD. Thanks, and go Douglass!