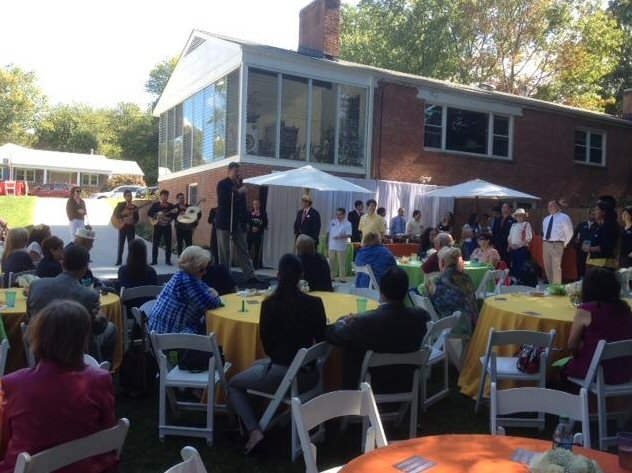 My god, not again; does George Allen never learn? Six years ago, Allen held his absurd “Ethnic Rally”, at which he was “trying desperately to demonstrate that he has some level of support among nonwhite Virginians,” but failing miserably (watch the video and “it’s pretty clear that there aren’t very many people there, and more than half of them are white” – including a contingent of George Washington University College Republicans). Anyway, if nothing else, we all had fun mocking Allen for that one.

This time around, the Allen people apparently think (click to “embiggen”) that a “Hispanics for Allen” event attended mostly by a handful of white people, plus a mariachi band (!!!), counts as a success in terms of Latino outreach. Or something. I mean, THEY put the photo up (they “built that?” lol) like it was a big success or something? Huh?!?

Who knows? After all, this IS the guy who told an Asian American “welcome to America,” and who argued that there was a “real Virginian” outside the apparently fake (?) Virginia of ethnically diverse NOVA, Richmond, and Hampton Roads. So what else would we expect but a few white people and a mariachi band at a “Hispanics for Allen” event? How about #FAIL?

Video: On One-Year Anniversary of First COVID-19 Case in Virginia, Gov. Northam Says “the end of this pandemic is in sight…there is every reason...