The following article is from former Delegate Albert C. Pollard, Jr.. As Pollard notes, he was also “Executive Director of the Virginia Chapter of the Sierra Club in the mid-1990’s.” 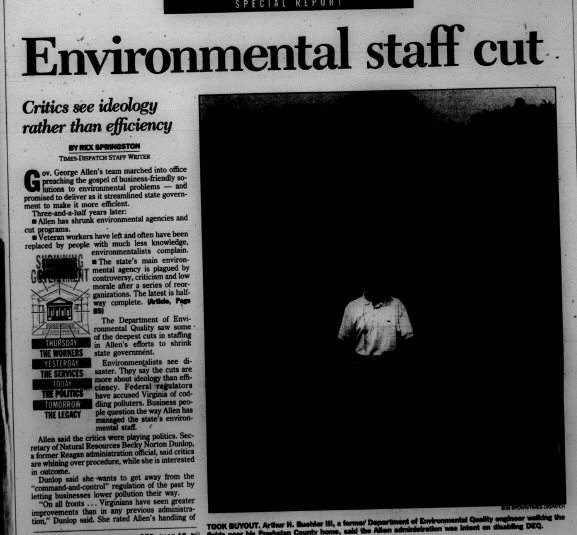 Despite the unprecedented spending of money this election season, one of the things that isn’t talked about it is Kaine and Allen’s environmental record.  To me this is surprising because the contrast could not be more clear.

I was the Executive Director of the Virginia Chapter of the Sierra Club in the mid-1990’s before I served in the House of Delegates and George Allen’s environmental record was big news back in the day. Open environmental antagonism was actually part of Allen’s cowboy schtick. He didn’t sugar coat it at first, he just attacked environmental protection.

In fact, one headline in the Times-Dispatch in August of 1996 actually reads “Allen Appearing More Nature Friendly.” Maybe that’s because Allen’s antagonism had started to tarnish his image. Indeed, polling at the time showed Allen with a 69% approval rating (yes, that’s right), but 55% said he “was going to far” in environmental cuts.

Allen’s effort to soften his image led to the only time a sitting Governor has tried to fire me (or any non-profit leader as far as I know). It was August 1996, and George Felix Allen was taking heat for his environmental record.

His solution? Raft the James River and then announce a river cleanup. Well, I went down to the presser and, with the cameras rolling, said the first thing on my mind, “George Allen having a river cleanup is like OJ Simpson having a fundraiser for battered women. You like the idea but you wonder what the motivation is.”

“Isn’t that pathetic?,” was Allen’s retort – and then, via his staff, tried to get the Virginia Chapter of the Sierra Club to fire me.

Instead, believing the only thing pathetic was his environmental record, my board gave me a raise. More on the details of his record over the coming weeks…

Video: @RepRiggleman (R-VA05) Warns of Dangerous “Law Enforcement False Flag” re: 1/6, Says It “Should Scare the Hell Out of People” (For GOP politicians, "If the base is believing this & you think that's how you win an election, the truth doesn't matter") https://bluevirginia.us/2021/06/video-former-rep-denver-riggleman-r-va05-warns-of-dangerous-law-enforcement-false-flag-about-1-6-says-it-should-scare-the-hell-out-of-people