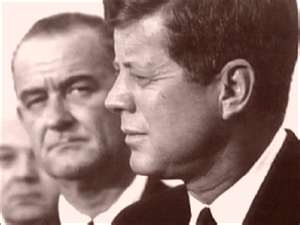 I’ve been reading The Years of Lyndon Johnson: The Passage of Power – Robert A. Caro’s critically acclaimed biography of LBJ during the time he served as Vice President, and then succeeded to the Presidency after JFK’s assassination in Dallas on November 22, 1963. I just finished the section on the Cuban Missile Crisis (see excerpt below, bolding added by me for emphasis), including the crucial executive committee (ExComm) meetings on how to handle the situation and avert a possible nuclear Armageddon.

During those meetings, LBJ had not said much of anything, but when he DID speak up, it was almost invariably to denigrate the “weakness” they were showing, and to side with the super-hawks that we needed to bomb/invade Cuba ASAP, and to lob comments like “All I know is that when I was a boy in Texas, and you were walking along the road when a rattlesnake reared up ready to strike, the only thing to do was to take a stick and chop its head off.”  Very helpful, huh? Not.

Of course, LBJ was completely wrong about that – another option would be to get away from the rattlesnake, or in this case – dealing with human beings, NOT rattlesnakes – to figure out a way to defuse the crisis without either side “striking,” potentially destroying mankind in the process.

It had been no oversight that Lyndon Johnson wasn’t invited to that crucial conference in the Oval Office on Saturday evening.

On Sunday, after the final ExComm meeting, Jack Kennedy said to his brother that this was the night he should go to the theater, like Lincoln after the Union victory in the Civil War, and Robert – the subject of assassination having been raised, and with it, of course, the reminder that the Vice President would thereupon become President – said that “if he was going to the theater, I would go too, having witnessed the inability of Johnson to make any contribution during all the conversations” In later years, he would recall Johnson’s displeasure “with what we were doing,” the way, in Bobby’s words, that “he would circulate and whine and complain about our being weak,” while never making “any suggestions or recommendations” himself. The people who “had participated in all these discussions,” Robert Kennedy was to say, “were bright and energetic people. We had perhaps amongst the most able in the country, and if any one of half a dozen of them were President the world would have been very likely plunged in a catastrophic war.” Lyndon Johnson, he would make clear, was one of that half dozen. Jack Kennedy, as always, was more oblique, but, through the means of another, shorter list, he also made his feelings clear. Recalls his friend, the journalist Bartlett, “He said after the Cuban Missile Crisis that there were three men on the Executive Committee that he would be glad to see become President of the United States: McNamara, Dillon, and his brother Bobby. He said that a couple of times.” Three men whom John F. Kennedy would be happy to have succeed him as President. The Vice President wasn’t one of them.

“You must know as well or better than I President Kennedy’s steadily diminishing opinion of him,” Jacqueline Kennedy would, years after the assassination, write in a private letter to Ted Sorenson. “As his term progressed, he grew more and more concerned about what would happen if LBJ ever become President. He was truly frightened at the prospect.”

Sad to say, LBJ proved JFK exactly correct in the end, showing that his extremely poor judgment during the Cuban Missile Crisis was no fluke during his own presidency, with regard to Vietnam. Thus, LBJ kept escalating in Vietnam, refused to take opportunities to potentially disengage, always extremely concerned about “losing face,” and/or being known as the President who lost Southeast Asia to the Communists.

The results: a disastrous war, one that resulted in the loss of Vietnam (and Laos and Cambodia) anyway, hundreds of thousands of American casualties, over 1 million Vietnamese deaths, ultimately the rise of the Khmer Rouge in Cambodia and the genocide there, and of course the tragedy/failure of LBJ’s second term.

Anyway, as I read all this, the parallels to today, and to the Obama-Romney race specifically, kept popping into my mind. Over the past few days,  as we all know, a crisis has flared up in the Muslim world, one that’s resulted in our embassies under siege, and several American lives – including our ambassador in Libya – being tragically murdered by armed thugs. President Obama’s reaction, through all this, has been (like JFK would have been) cool, steady, restrained, mature, deliberate, rational, well-considered, thoughtful, and taking into account all the facts before jumping to any conclusions.

In stark contrast, Mitt Romney the past few days has been hot headed, erratic, belligerent, wildly hawkish, ignorant, inappropriate, off message, counterproductive, and just plain stupid. Basically, Romney has exhibited all the negative traits we saw during his fiasco of a foreign trip over the summer, but this time during a real crisis, not just insulting our allies and making stupid comments everywhere he went.

In the end, there’s only so much the United States can do about this situation – or many foreign policy situations, for that matter – and it takes a wise, mature President to understand that. Based on the behavior he’s exhibited during this campaign, or certainly during the past few days as he’s completely disgraced himself, Mitt Romney’s certainly not wise or mature when it comes to foreign policy. Fortunately, he’s not in the White House; Barack Obama is, and one thing seems sure to me — President Obama, like JFK almost exactly 50 years ago, always works hard to ensure that our country emerges from whatever situation we find ourselves in with the best possible – or, at the minimum, “least bad” – outcome, given the circumstances.

What about Mitt Romney, if god forbid he were to become president? Like LBJ, I strongly suspect that he’d side with the superhawks (his neocon/superhawk foreign policy advisers are pretty much the same folks who were such a disaster during the Bush 43 administration), advocate for something hotheaded, and get the United States into a whole lot more trouble than we already are facing. Same thing with other crises or trouble spots, whether we’re talking about Syria, China, whatever. As Romney’s demonstrated the past few days, when it comes to foreign policy this guy’s judgement simply isn’t up to snuff, just like LBJ (in LBJ’s case, at least he was a genius in handling the Senate, and domestic policy more broadly, even as he was a disaster when it came to foreign policy).

In the case of Romney, he’d almost certainly be a disaster on foreign policy, just as LBJ was. But unlike with LBJ, there would be ZERO redeeming qualities on domestic policy in a Romney presidency; most likely, that would be a disaster as well. Which raises the obvious question: Why would anyone, other than one of Romney’s crazy neoconservative puppetmasters, perhaps, vote for someone like that? Got me.