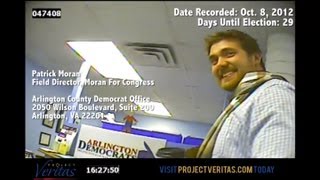 Second, the Jim Moran for Congress campaign released a statement a little earlier this evening:

Our campaign welcomes a thorough investigation and we will fully cooperate. The incident involving Patrick was an unfortunate situation. While clearly lacking good judgment, Patrick’s unsolicited interaction with a right wing political operative seeking to trap him in a damaging conversation did not constitute an unlawful action. We are confident this unwelcome chapter in the campaign will be quickly and favorably closed.

Congressman Moran released the following statement regarding Patrick Moran and the O’Keefe video:

“I don’t condone the actions of the right wing organization in question, but I recognize that this incident is teaching Patrick a tough lesson early in life. I know that my son’s intention was to deflect the line of questioning by this trained political operative bent on goading him into a specific response.

“But the fact remains that the conversation drifted into discussions that reflected a serious error in judgment that Patrick wishes he could take back.

“In life, if we learn from our mistakes, we move forward stronger, wiser, and committed to ensuring they are not repeated. I know Patrick will come out of this tough situation a better man for it.”

Hopefully, the Moran campaign is right that Patrick Moran comes out “wiser” from this, and more importantly from a political perspective, that this case “will be quickly and favorably closed.” For now, though, it’s in the hands of law enforcement authorities, as well it should be. Stay tuned…