(An Old Dominion University poll has Obama up 50%-43% in Virginia, but that poll was conducted over a ridiculously long 4 weeks, so should be taken with a HUGE pillar of salt! As in, #FAIL!!! – promoted by lowkell) 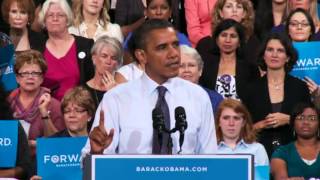 Disinformation by the pathologically lying Romney campaign to the contrary, a brand-new poll of Virginia likely voters by the Mellman Group, the race between Barack Obama and Willard “Mitt” Romney remains razor tight. Here are the toplines:

*3% of Virginians already mailed their ballots and 3% have already voted in person.

*”The President’s lead expands to a still-close 2% among voters with strong views (43% strong Obama, 41% strong Romney).”

*”It is next to impossible to find another race in the country in which the candidates are so evenly matched. However, President Obama does hold an important image advantage among undecideds, who view him more favorably than his challenger.”

In sum: the race in Virginia is razor tight, possibly a slight lead for President Obama. This means that the key to victory over the next 13 days is getting out every possibly registered voter for Obama. If you haven’t phone banked, door knocked, lit dropped, donated money, etc., now’s the time to do it! 🙂

P.S. I was also emailed a new Mellman Group poll of New Hampshire, showing Obama leading Romney in the Granite State by 3 points, 48%-45%. A few other interesting numbers from that poll: by a 27%-54% margin, people oppose privatizing Medicare; by a 55%-35% margin, people support ending the Bush tax cuts for households with incomes over $250k; by a 95%-8% margin, people oppose cutting Social Security benefits; by an 80%-17% margin, people favor creating jobs by investing in roads, bridges and schools.