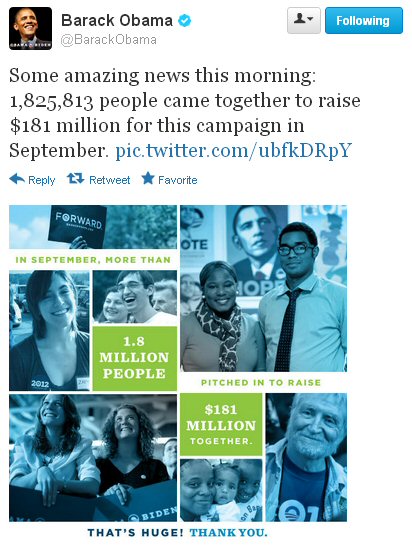 As Politico reports, this enormous haul brings the DNC/Obama campaign’s “the total raised during this election cycle to nearly $950 million with a month to go until Election Day.” Also impressive: “The average contribution was $53, and 98 percent of all contributions were of $250 or less.”

In comparison, a huge percent of Mitt Romney’s money during the primaries and general election has come from super-rich donors, such as the Koch brothers, the heinous Sheldon Adelson and Foster Friess, Wall Street (of course), and the people he was talking to when he made his infamous “47 percent” comments a few months ago. Just follow the money…that should tell you all you need to know about who to vote for this election.