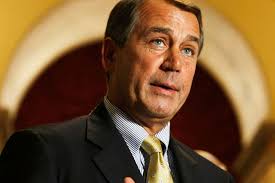 Even when we’re done with the “fiscal cliff,” it looks like we’ll be compelled, early in the new year, to face another totally unnecessary, Congress-made crisis– over the debt ceiling.

In a news conference on December 13, House Speaker John Boehner declared that the Republicans in Congress would insist on holding onto their ability to compel the U.S. to default on its credit, saying that Congress would never give up its “power of the purse.”

But the legitimate congressional powers of the purse are about spending, and this has nothing to do with that. The debt ceiling isn’t about spending.  The money has already been spent. This is about paying one’s bills.

Paying one’s bills is what responsible people-and governments-do.  The power that Boehner wants is the power to make the United States an irresponsible country.

In recent generations, the debt ceiling has been raised eighty-some times.   Never before — until the summer of last year- has any Congress seriously balked at raising the debt ceiling.

We Americans have benefitted greatly from Uncle Sam’s impeccable reputation.  It allows our government to borrow at very low interest rates.

But if the Republicans compel the U.S. to ruin our reputation, investors at home and around the world will demand a higher rate of interest to induce them to buy United States government debt.

That would make the federal deficit — which the Republicans claim to care about – still worse.

The power that Boehner insists on keeping cannot be used without damaging the nation.  Even the mere threat to make the U.S. default on its debt is damaging.

Last time around, in 2011, the Democrats and President Obama gave in to Republican demands in order to avoid default. But even without default, serious economic damage was done. The uncertainty, and the spectacle of such unprecedented and irresponsible political behavior, rattled the world of markets and business, and set back our economic recovery.   Good studies show that this episode of blackmail cost the United States billions of dollars, as a country and an economy.

The damage is political as well as economic. By making such a threat, the Republicans would compel the Democrats to make one of two terrible choices.

1) Either give in to blackmail, which we as a nation say should never be done.  (“We don’t negotiate with terrorists,” the United States has always declared.  And what else is the Republican extortion  –Meet our demands or we’ll hurt America–  but political terrorism?)

2) Or refuse to meet the blackmailers’ demands and wait to see whether the hostage-takers kill the hostage.

These are not the choices you give your opponent if you want your democracy to be healthy.  A great nation cannot chart a proper course if its political leaders are forced to choose either to give in to blackmail or to  expose the nation to the real harm the blackmailer is threatening to inflict.

America doesn’t have to be this way.  We should insist on political behavior that serves the country, rather than makes a fight over everything, even when that means damaging the country.

We need Republicans to work to find cooperative approaches to solving genuine American problems, not create “fiscal cliff” and “debt ceiling” crises that are wholly the result of their own destructive behavior.

It’s up to us, the American people, to let them know that we’ve had enough of this game of chicken.

Andy Schmookler, formerly a candidate for Congress in Virginia’s 6th District, is the author of many books on the challenges facing America, and humankind generally, including Debating the Good Society: A Quest to Bridge America’s Moral Divide.  He lives in Shenandoah County.