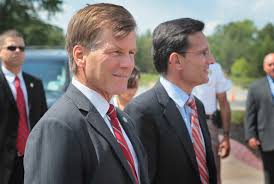 Will the GOP statewide ticket choose Governor McDonnell, or Congressman Cantor, as their role model?

It is likely to be a fateful choice.

President Obama just put on a clinic in governing. So did Vice-President Joe Biden. As I have said, Terry McAuliffe – for the time being – just has to make sure his electric car doesn’t stall inside the Hampton Roads Tunnel at rush hour, or cause a big pileup at the Mixing Bowl in NOVA. Right now, the politics of 2013 is all on Ken Cuccinelli. Terry MAC is the other guy in the race for now. His staff probably doesn’t much like that situation. But they should.

Why? Because image wise, the AG is seen more like Eric Cantor than like Bob McDonnell. If this persists until election day, Terry MAC could lead a Democratic sweep. Let me explain.

Last November 6th, the President won re-election. There were two Republicans in Washington who understood the dilemma thus created for the lame-duck Congress dilemma: Senate Minority Leader Mitch McConnell and House Speaker John Boehner. This is why Senator McConnell remained quiet for so long: he had agreed to give his friend the Speaker a chance to avoid a coup by House Majority Leader Eric Cantor.

Boehner understood the political math. The President had won re-election promising to raise taxes on the top 2% of wage earners. The GOP duo of Romney and Ryan called the Obama plan the biggest tax increase in history. That was true as they defined it. At the same time, the Obama plan called for the permanent extension of the Bush era tax cuts for the other 98%. Boehner knew this would be the largest permanent tax cut in American history. That is how the White House saw it.

This left Republicans with three choices in the lame-duck session.

(1) THE FULL MONTE OF OPPOSITION. The House GOP could fight the President all the way, and refuse to pass the Obama plan during the lame-duck session. But McConnell had already told Boehner, my folks in the Senate are going to cut a deal with the White House. It was a replay of the 2011 debt ceiling debate. Thus, Boehner understood the bottom line – it would be the House GOP against the world. The polls showed the public blamed the GOP for the stalemate already; if they went the Full Monte, the House GOP would get crushed by public opinion. Boehner would ultimately be seen as a toothless Speaker and get blamed for the public debacle. So would his leadership team.  Cantor got that too.

(2) THE SMART PLAY. The GOP had an opening to get most of the credit for the tax cuts. Once negotiations between the White House and the Speaker (again, McConnell laid low) got predictably nowhere (has this not been the pattern for years now?), the Speaker could seize the opening — but only if he could get the House GOP to go first, to put a fiscal cliff deal on the table with some tax increases. There was no reason for the President to do what he did in the 2010 lame duck session, agree to extend the Bush tax cuts. The sunset provision coming into play on December 31, 2012 was the President’s leverage: use it or lose it.

So Boehner made the SMART PLAY: the “millionaire’s” tax increase made perfect sense politically. Cantor realized this was Boehner’s only play. So he had to sign on, or be disloyal. But then the GOP House Caucus rebelled, seeing it as caving-in to Obama. In fact, Boehner was doing no such thing; he was, to the contrary, trying to make lemonade out of lemons for the GOP. He got crushed in his own party.

At that moment, Boehner knew he was Sean Penn, AKA Dean Speaker Walking. So did Cantor.

(3) CANTOR RISING. McConnell and Boehner are old school: the best deal you can get is a win, not a loss. And when you are seen as being able to win stuff, your stock rises on Capitol Hill.

Cantor is from the Newt Gingrich school: the best deal you can get is a loss IF it allows the other side to get credit for a win. Gingrich shut down the government because he didn’t want to be seen as giving Clinton a win. But more importantly, backbench GOP Congressman  Newt Gingrich rose to the Speakership by opposing a tax increase deal brokered by Republican President Bush to help fix the budget.

Boehner and McConnell realized early that Cantor is a shrewd player. Having gone alone with Boehner’s “millionaire tax play”, he could not then be called disloyal if he bolted at the end. Once Cantor realized the Senate fiscal deal bill had the votes to pass in the House, he had every incentive to vote NO, joining the majority of his GOP Caucus. Cantor screwed Boehner big time by doing it. But politics is a contact sport.

HOW THIS IMPACTS THE 2013 VA GOV RACE

Ken Cuccinelli’s rise in VA GOP politics has been based, in large measure, by his willingness to challenge the very GOP constituency that backs the Fiscal Deal bill.

That is to say: The AG, despite holding an executive job, has shown little interest in creating a “governing image” as we enter the 2013 campaign. Terry MAC is a businessman: by and large, voters see businessmen as having the practical side needed to govern.

Governing, in the end, is about choosing, often from the lease worst option. In that regard, it is instructive that Mr. Ryan voted for the deal despite all his rhetoric last year. Why did Ryan do that? Because he wants to be taken as a serious player in the upcoming fiscal discussions, in the budget debate, in the debt ceiling debate. Obama won, and Ryan lost. He got it.

So Cuccinelli has a choice. McDonnell has a governing image: Cantor does not. Cantor only needs partisan GOP members of Congress to get to be Speaker. Cuccinelli needs middle-of-the-road swing voters to get to be governor.

Cantor could “dis” Boehner because in the end, as he doesn’t need Boehner to get what he wants. Can Cuccinelli afford to “dis” McConnell and still get to be governor? I don’t see how.

Right now, the McDonnell image is up for grabs. If Democrats can seize any part of it before Cuccinelli awakens to the inevitable political math, they will be heavy favorites to win in 2013.