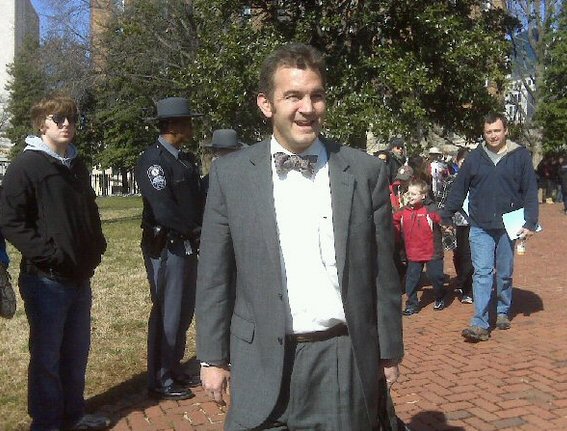 Corporate welfare-loving Republicans (and some Democrats as well, sadly) will probably not go for this, but it's great public policy, as these tax breaks are unaffordable ($12.5 BILLION per year!), wasteful, regressive, and usually unnecessary. Thanks Chap!

SENATOR PETERSEN CALLS FOR FIVE YEAR EXPIRATION DATE FOR VA TAX CREDITS
Richmond, VA– Today, Senator Petersen announced his proposal to establish a five year limit for all tax credits in Virginia. The proposal takes the form of a constitutional amendment, subject to ratification by both the Senate, House of Delegates, and the citizens of Virginia.
A recent JLARC (Joint Legislative Audit and Review Commission) report detailed how tax breaks cost Virginia taxpayers at least $12.5 billion annually, roughly double what the Commonwealth spends on direct aid to public education. Petersen believes that the lack of expiration dates for the tax credits is one of the reasons the amount and cost has become so inflated: “We've got tax credit on the books that have long outlived their intent and purpose.”
Petersen has generally opposed tax credits as a way to influence economic development, but acknowledges that sometimes they can be useful in certain circumstances. “Last year I introduced a bill that would have helped distribute defense contracting dollars around economically depressed areas of Virginia. Had it passed, we would have found out if it worked. If it didn't work, it should automatically expire.”
Petersen's proposal is retrospective, meaning that even current tax credits will be assigned an expiration date following its passage. This is to insure that even current tax credits receive the scrutiny of lawmakers. After five years, lawmakers will have the opportunity to decide whether each credit is effective in its purpose and cost.
Petersen: “All of our tax credits need this kind of inspection, and I hope my colleagues in the House of Delegates, Senate, and the people of Virginia will agree.”
The text of the constitutional amendment, SJ 281 is available at:
<http://lis.virginia.gov/cgi-bin/legp604.exe?131+sum+SJ281>
The JLARC report on tax credits is available at: (PDF)
<http://leg2.state.va.us/dls/h&sdocs.nsf/By+Year/SD42012/$file/SD4.pdf>
Recently, the Virginian-Pilot ran an extensive story on tax credits titled: Virginians Shoulder billions each year in tax breaks by Bill Sizemore. That story can be found at: