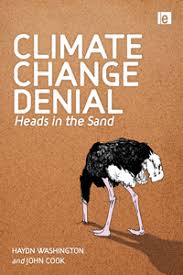 Interpretation # 1:  “MAN MADE global warming is, not a hoax, but a horrendous scam designed purposely to amass even more power within government and those who benefit from its stupidity and corruption” [my interlocutor, with the handle “Techknowledgie”  wrote].  In other words, [I said,]for the very first time in history, in the world of science, there has been an international conspiracy of scientists, fully trained in the techniques of scientific research and ethics of the scientific quest for the truth, to “scam” the people of the planet.

Interpretation # 2:  The scientists know what they’re talking about, but a couple of the richest industries in the world are trying to sew doubt so that our society will stay addicted to what they sell and they will get even richer.

The first interpretation (yours, Techknowledgie) requires one to believe that something (a widespread conspiracy of scientists to deceive the rest of the world) that is completely unprecedented –and I would wager that anyone who knows the world of science well would declare such a conspiracy impossible to create, even if one wanted to– is taking place, and has been taking place for decades.

The second interpretation (mine) requires that one believe that the oil, gas, and coal industries would be willing to do what every other industry that turned out to be dealing in death –the tobacco companies and the asbestos industry, to name two prominent examples–have done when science found that changes were required that would cost them money:  lie to people to keep them hooked to their product, or working for low wages and with lousy protection.

Which is more likely:  the unprecedented, or the par for the course?