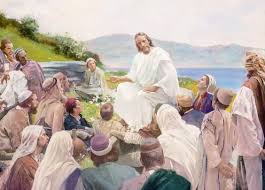 Contradictions as a Form of Brokenness

First I posted this piece on my campaign Facebook page-a message to the good, decent conservatives. It’s part of my attempt to help bring our conservative neighbors back to the better angels of their nature:

I bet the way you act and feel in your church is a lot more in keeping with the Sermon on the Mount than the way your political leaders encourage you to act and feel.

If you believe we should be guided by the Sermon on the Mount, are these leaders the kind you should allow yourself to be guided by?

Then one of my readers felt prompted by what I say above to take a swipe at the religion of a good many of the conservative people that I’m addressing. Religion is mostly a problem, as he sees it.

In my response to that reader, I indicated that in my message to the conservatives I’m referring to something quite beautiful in the religion, namely to the spirit that embraces peace and mercy and forgiveness and respect and humility. That is, the spirit of the Sermon on the Mount. He saw my point, but also tried to refocus our attention on religion as problem-the “dogmatically rigid, exclusivist religions that dominate red states.” This led me to respond thus:

Your response brings up some very important points.  (They are points that, in my mind, underscore the importance of the “Swinging for the Fences” project.)

Of course, it is possible to find destructive and broken things being expressed in the way any given religion will sometimes be understood and practiced by some of its followers. We would expect religion to  be broken in many ways when the world in general has so much brokenness in it. So defects can be found. You call attention to “exclusivist” forms of Christianity in America, a kind of brokenness which could perhaps be characterized (or caricatured) as “We’re in with God, and everyone else is of the Devil.”

In this particular instance — of the church-going Republican supporters who follow one spirit in church and an opposite spirit in the political realm — I am focusing on another kind of brokenness: a tendency to hold contradictions, without noticing or trying to resolve those contradictions. People who are inhabited by fundamentally opposing elements are not of a piece. They’re broken.

There’s something broken, in this case, about someone who goes to church and says he believes in the ethic Jesus teaches in the Sermon on the Mount, and then goes home and is a devotee of Rush Limbaugh the rest of the week, somehow manages not to see the conflict within. The spirit of Limbaugh is about as far from the spirit of the Sermon on the Mount as you can get.

Where does this brokenness come from? Should it be understood in terms of the defects of what’s taught in the church? I think not.

Yes, we can see how the religion expresses itself in broken ways, and how there’s a failure to transmit the spirit of the Sermon on the Mount in such a way that it meaningfully interferes with someone aligning himself with a Rush Limbaugh.

But there’s a deeper level. What’s wrong with the religion is itself, in important ways, the result of a spirit that resides in that culture (or subculture) generally.

The same people who don’t notice any contradiction between the two opposite spirits they embrace can also embrace the contradiction of being a self-declared “patriot” who habitually relates to the U.S. government as the enemy, as if it were an occupying power. And these “patriots” include gun-rights advocates whose main arguments for allowing citizens to own weapons of war is that we citizens need to be prepared to fight the government.

My campaign speeches often went through three such contradictions in today’s Republican Party. “They claim to be conservatives, or patriots, or Christians, but the spirit they’re serving is just the opposite.”

The pattern of self-contradiction — of lack of integrity, of lying to oneself-is thriving today throughout the political right. “I SAY that I believe in such and such, value such and such; but I ACT as if I am the opposite of what I say.”

The lie is entirely fundamental to this. I tell myself I’m what I should be, but I’m giving expression to what is forbidden.

Such contradiction is a sign of brokenness. And behind this brokenness is a force (a spirit) that fosters brokenness in everything it touches.  The problem with these churchgoers — who, in the realm of power, are obeying a spirit the opposite of what their Lord teaches – is but one instance of the larger truth.

It can be demonstrated how that spirit generates brokenness throughout the culture where its reach allows an impact: in the politics, in the power relations among the components of society, in the relationship with the truth, in the way the culture deals with the deep nature and needs of the human being, in the dynamics of the family system, in the subculture’s system of values, in the psychic structure of the human being…

That spirit fosters brokenness — in people, and in systems — and then exploits that brokenness to extend its domain.

I call your attention to a discussion in an essay I wrote that I regard as important to the whole understanding I’m developing now in “Swinging for the Fences.” (Recall that there are two main ideas that constitute the “big game” I’m hunting for:  1) The idea that there are forces in the world that can be appropriately called “spirits,” and 2) The idea that in the human drama, one major part of that drama can aptly be described as “the battle between good and evil.”)

In that article I describe the roots of such patterns of contradiction and self-lying.  I touch upon the regime of racial oppression in the South during Jim Crow, and upon the assault on the Jews by the Germans under the Nazis. It’s past the halfway point in my article, whose title is “The Concept of Evil.” (The article can be found here on the “Common Dreams” website from back in 2005.)

Here’s the passage from “The Concept of Evil”:

The broken regime of racial persecution in the American South, as Lillian Smith showed in her classic Killers of the Dream built upon the broken psyche of white Southerners brought up with harsh moral strictures that prevented the harmonious integration of natural sexual impulses. The forbidden impulses were then projected out to be rediscovered and punished in the darker race.

In Nazi Germany as Alice Miller showed in For Your Own Good the broken regime of ethnic annihilation built upon the psychic brokenness created by generations of child-rearing practices that legitimated the systematic brutal treatment of children. What was driven underground in the child emerged with a fury against inferior peoples to be destroyed in the name of the noble Fatherland.

In each case, the pattern of brokenness gets spread from the culture to the individual and then back again. The harsh culture, making war against the natural needs and will of the growing human, spreads its pattern of division by preventing the human creature from reconciling or even acknowledging the elements within it.