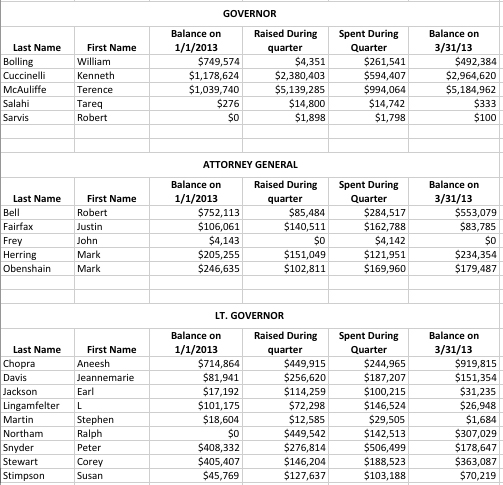 I know most of our focus right now is on the events in Boston, but I also wanted to update everyone on Virginia fundraising numbers from the 1st quarter of 2013 (1Q13), which are coming in now [UPDATE: Click on image to “embiggen”]. There’s nothing yet on the State Board of Elections website, and VPAP is down, but fortunately, at least one intrepid reporter (Chelyen Davis of the Fredericksburg Free Lance-Star) has managed to track down 1Q13 fundraising numbers. A few highlights:

P.S. Nearly half of the money Ken Cuccinelli raised came from the Republican Governor’s Association, which gave him a cool $1 million.