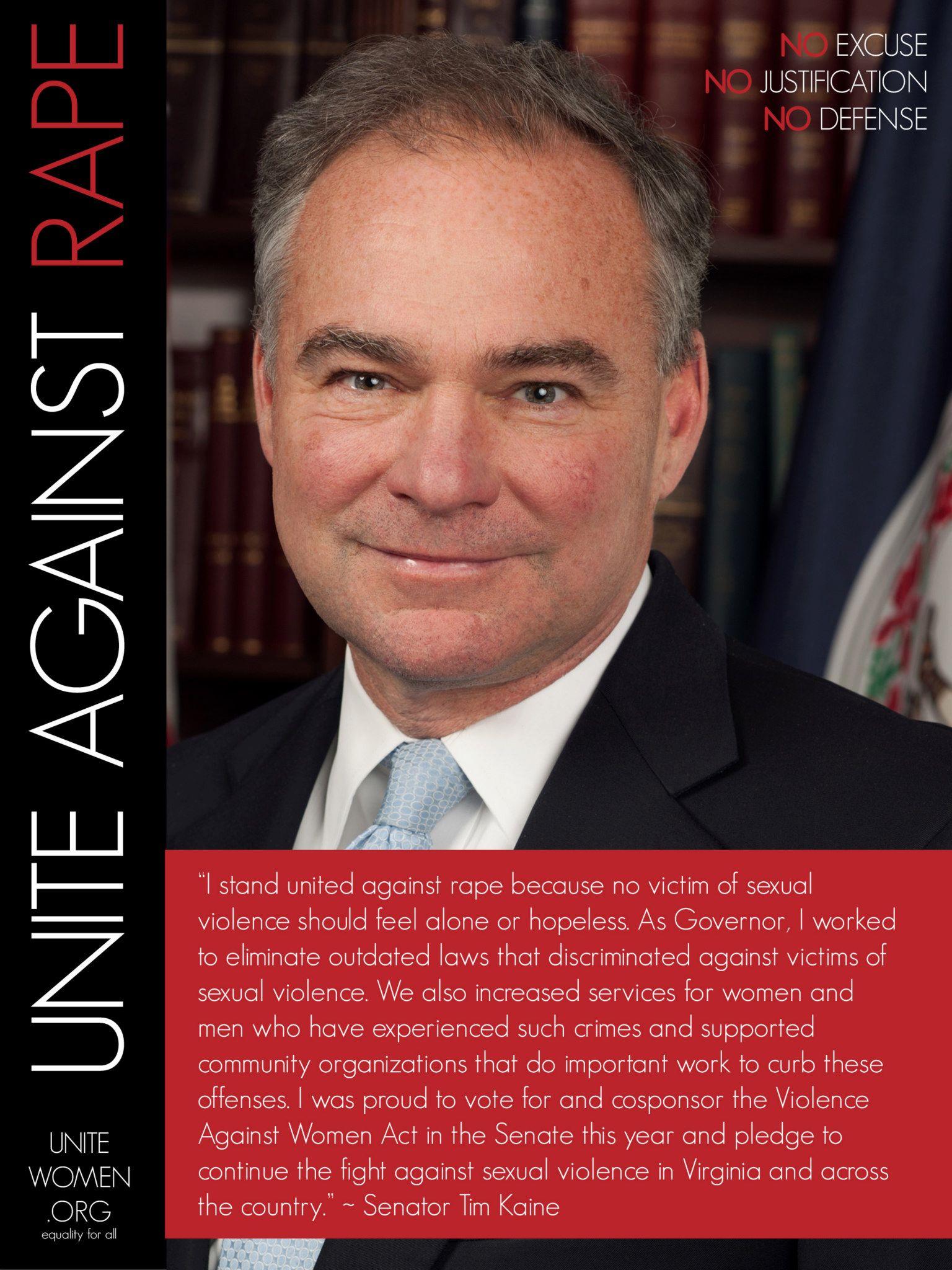 International women’s rights organization, UniteWomen.org, recently launched a rape awareness campaign, Unite Against Rape.  An eclectic mix of notable names and average Joes and Janes are lending their voices to this campaign by submitting statements describing why they stand united against the growing societal epidemic of rape.  The two most recent high-profile submissions were from Virginia’s U.S. Senators, Tim Kaine and Mark Warner.

Both Senators were cosponsors of the Violence Against Women Act.  The Senate version of VAWA passed the House of Representatives on February 28 and was signed by President Obama on March 7, thereby reauthorizing this important legislation.

Senators Tim Kaine and Mark Warner join the ranks of a potpourri of other participants.  Among those who submitted statements for the Unite Against Rape campaign are the following:

Indeed, this is a motley crew of individuals with at least one thing in common: the desire to help raise awareness of the epidemic of rape in our culture.  In addition to these public personalities, a slew of everyday women and men from around the world are stepping up to stand in solidarity. 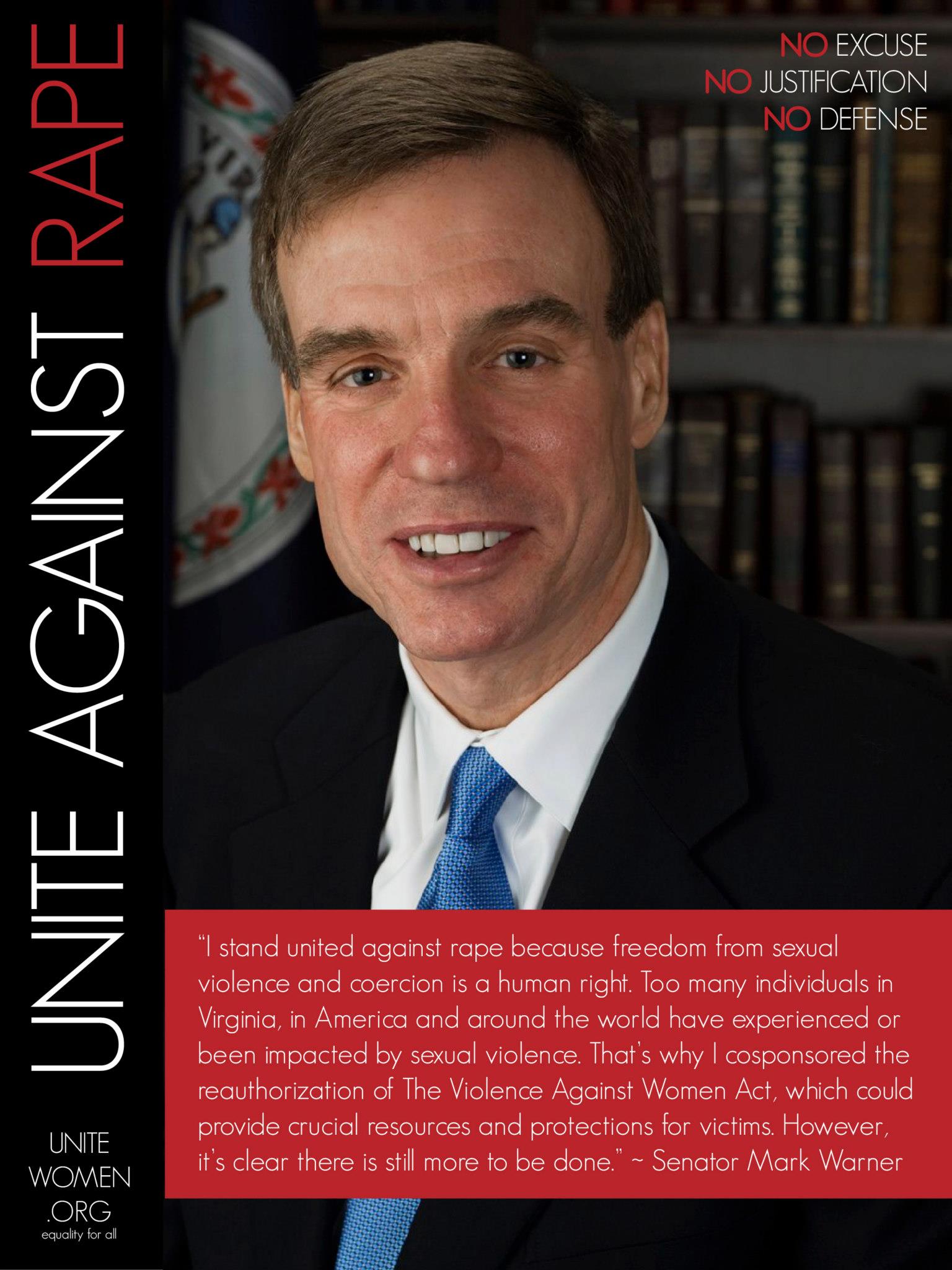 The purpose of the campaign is to amplify to the public dialogue surrounding sexual assault, specifically to diminish the societal stigma that often accompanies having been raped and eradicate the shaming and blaming of rape victims.  The issue was already in the public eye because of the rape trial in Steubenville and the horrific gang rapes being covered by the media in India and other places in the world – including right here in the U.S.

UniteWomen.org made a post on their Facebook page inviting rape survivors to submit their photos and quotes to stand in public support of Jane Doe of Steubenville. Hundreds of submissions poured in, both from rape survivors and those who support them.   The organization has created Internet memes of each of these submissions and is in the process of producing additional educational graphics, YouTube videos and PSAs.  The memes are being released a few at a time on the organization’s Facebook page (www.facebook.com/UniteWomen) and their website (www.UniteWomen.org).

UniteWomen.org has special ties to Virginia because the founding of the organization was principally inspired by the media coverage of the arrests of the peaceful protesters at the Virginia State Capitol during a 2012 protest of the trans-vaginal ultrasound legislation.  The resurgence of the women’s rights movement nationwide largely began with the women’s rights protests in Richmond, and it seems very fitting that the first two legislators to participate in UniteWomen.org’s Unite Against Rape campaign are Virginia’s two senators.

“I stand united against rape because freedom from sexual violence and coercion is a human right. Too many individuals in Virginia, in America and around the world have experienced or been impacted by sexual violence. That’s why I cosponsored the reauthorization of The Violence Against Women Act, which could provide crucial resources and protections for victims. However, it’s clear there is still more to be done.”

“I stand united against rape because no victim of sexual violence should feel alone or hopeless. As Governor, I worked to eliminate outdated laws that discriminated against victims of sexual violence. We also increased services for women and men who have experienced such crimes and supported community organizations that do important work to curb these offenses. I was proud to vote for and cosponsor the Violence Against Women Act in the Senate this year and pledge to continue the fight against sexual violence in Virginia and across the country.”