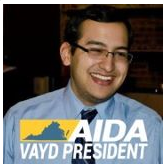 The Virginia Young Democrats are meeting today for their 2013 convention in Norfolk. The results for president were just announced, with 518 votes going to Gonzalo Aida and 276 votes to Matt Bell. Congratulations to “Gonzi” on his election as new VAYD president. Also, congrats to the following new VAYD officers: