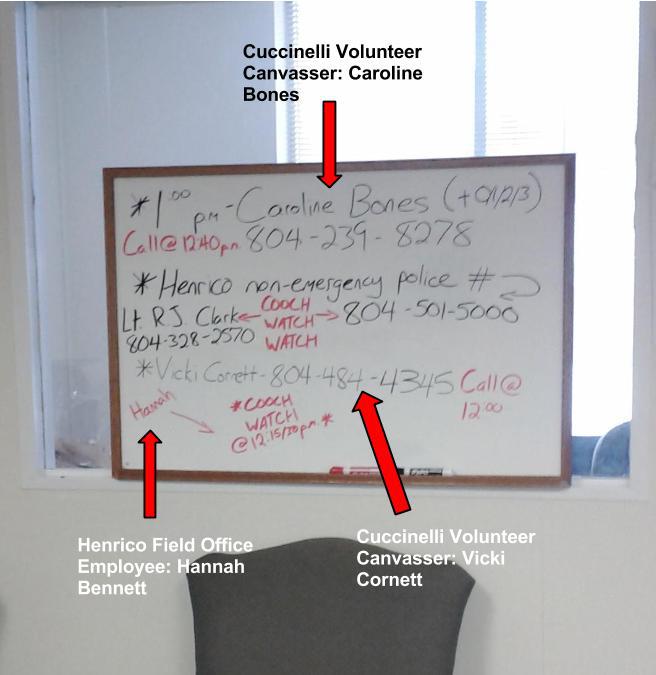 Wow, this does not look good at all (click on image to “embiggen”).

An anonymous Cooch Watch supporter got into Ken Cuccinelli’s Henrico Field Office and sent us this picture. We did our own research and this is real, folks. Cooch’s minions have “Cooch Watch Watch” up and running in cooperation with the police.

In sum, according to the “Cooch Watch” folks, Virginia Attorney General Ken Cuccinelli is alleged to be coordinating with local police in Henrico County to keep an eye on a bunch of bloggers who pose absolutely no threat to anyone. If this is really what’s going on here: wow.

So, let’s summarize Cuccinelli’s unethical behavior over the past couple years:

*Using the powers of the AG’s office to persecute a scientist he didn’t agree with (Democratic AG candidate Mark Herring has called that behavior by Cuccinelli “UnAmerican,” and he’s right!)? Check.

*Crony investing with a slimeball company that pushes “tobacco candy” to kids? Check.

*According to CoochWatch, having the police keep an eye on a bunch of bloggers who don’t want him elected? Check.

P.S. One person on the  “Cooch Watch” Facebook page wrote, “[I] just called the 501-5000 number. [T]he lady who answered the phone professed ignorance about the possibility that a sitting politician is abusing state power by asking one of the coercive agencies of the state (the PD) to spy or harass a women’s health advocacy group. She also verified the 328-2570 number as an east end PD office number.”