National Geographic News recently posed a somewhat puzzling question: Is Canadian crude oil (also known as tar sands oil) worse than other types of crude? The question was posed in the wake of the disastrous and all-too-predictable ExxonMobil oil spill “across an Arkansas suburb” a week ago. National Geographic’s question is puzzling because it really misses the point of what many Americans truly wish for: a move away from fossil fuel energy.

As I hinted at above, Exxon’s pipeline rupture and subsequent massive oil spill hardly comes as a surprise for those of us in the land of reason. For instance, it’s reasonable to assume that if the flow rate of a pipeline, say the existing Keystone pipeline, is 410 barrels a minute across a series of pipes hundreds or thousands of miles long, an accident is bound to happen, and that “accident” will dump over 6,000 gallons of crude IF TransCanada is accurate in their 15 minute-flow cut off time (a big IF!). If this flow cut off time is higher, say by 5 minutes, an extra 2,000 barrels of oil will be spilled, adding an even bigger insult to an already preventable injury.

So far, I’ve seen a number of oil spill figures cited, ranging from “a few thousand barrels” of spilled crude to twelve thousand. Of course, none of these spill figures take into account the damage that has been wrought upon the communities who have to live and deal with the aftermath of  this “accident.” But think for a moment about how you would feel if thousands of barrels of crude oil was spilled in your community? How would that affect you psychologically? How would it affect your property values? How much time would you have to spend making sure that the company that spilled the oil thoroughly cleans up the mess they have made? And finally, how long will the stigma of the oil spill ‘stain’ the community, so to speak?

Then there are the environmental consequences of any oil spill that have to be taken into consideration (and yes, tar sands oil may be more detrimental to organisms in the environment than “other forms of crude”).

To my mind, the question of whether or not tar sands oil is worse than other forms of crude is like asking how many angels can stand on the eye of a needle? The question is utterly pointless and absurd. The right question to ask is: when are we going to get serious about investing in and using renewable energy in America? 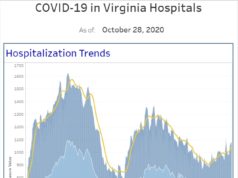 New Report on Militia Groups and “Other Armed Non-State Actors”: Virginia’s Been “a major target throughout the summer, with at least nine militias active in recent months” https://bluevirginia.us/2020/10/new-report-on-militia-groups-and-other-armed-non-state-actors-virginias-been-a-major-target-throughout-the-summer-with-at-least-nine-militias-active-in-recent-months h/t @kamamasters