What’s the difference between Virginia Governor Bob McDonnell and former Illinois Governor Rod Blagojevich, now “serving a 14-year sentence in federal prison following conviction for corruption including the soliciting of bribes for political appointments?” Well, so far at least, Bob McDonnell hasn’t been arrested by federal agents and put on trial for bribery and corruption. But based on this Washington Post front-page story, that might just be a matter of time at this point.

FBI agents are conducting interviews about the relationship between Virginia Gov. Robert F. McDonnell, his wife, Maureen, and a major campaign donor who paid for the food at the wedding of the governor’s daughter, according to four people familiar with the questioning.

The agents have been asking associates of the McDonnells about gifts provided to the family by Star Scientific chief executive Jonnie R. Williams Sr. and actions the Republican governor and his wife have taken that may have boosted the company, the people said.

Among the topics being explored, they said, is the $15,000 catering bill that Williams paid for the 2011 wedding of McDonnell’s daughter at Virginia’s historic Executive Mansion. But questions have extended to other, previously undisclosed gifts from Williams to Maureen McDonnell as well, they said. 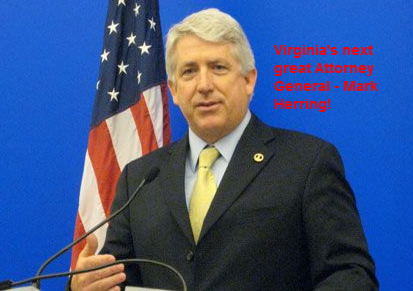 By the way, I think it’s well worth noting that, to date, the one and ONLY Virginia elected official (or candidate for statewide office) to call for a federal investigation into both Bob McDonnell and Ken Cuccinelli (who has his own sleazy connections to Jonnie Williams and Star Scientific) for corruption has been State Senator and Attorney General candidate Mark Herring. On April 11, Sen. Herring said that it’s time for a “federal investigation into the relationship between Virginia Governor Robert McDonnell and Attorney General Ken Cuccinelli, and the company Star Scientific and its Chief Executive Officer Jonnie R. Williams Sr.” In making that call, Mark Herring demonstrated several of the key traits we should want in an Attorney General: integrity, forcefulness, strict adherence to (and respect for) the rule of law, and a zero tolerance policy for corruption of any kind in our state government.

Sadly, Virginia’s current Attorney General not only hasn’t been on top of this situation, in fact he’s been caught up in it himself! (note: for the history of Cuccinelli’s corruption, not just with Jonnie Williams/Star Scientific but going back to Bobby Thompson and the “U.S. Navy Vets” scandal, click here and also see Steve Shannon’s letter here.) I’d also note that, instead of spending his time doing what an AG’s supposed to be doing, Cuccinelli instead has run around wasting Virginia taxpayer money on his wild goose chases – persecuting a leading climate scientist, getting his ill-conceived lawsuits thrown out of court, bullying the state health board to shut down women’s health clinics, and pushing his far-right-wing Tea Party ideological agenda on a wide range of issues. This November, it’s vitally urgent that we replace this guy (if he’s not in jail himself by then) with Mark Herring, a man with the utmost integrity and talent for the job.