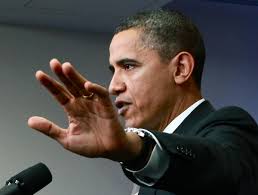 I heard you on TV last week, talking about guns. I’m glad you’re pressing the matter, and not just letting it die. But something about the way you talked about the gun issue made me want to scream.

I heard you doing that “both sides do it” nonsense.  Explaining why it’s so hard to get reasonable things done, you said both sides take “extreme positions.”

But just what is the “extreme position” anybody in Congress is taking on the gun-control side?  Is anyone taking a position more “extreme” than what you have proposed — universal background checks and a ban on weapons and ammo-clips that enable a shooter to massacre dozens of people within seconds?

Even if there were positions more in the direction of gun-control than yours, would they be “extreme” using the laws of all the other advanced societies in these matters as the standard of what’s reasonable and what’s extreme. (The citizens of those nations are 20 times less likely than Americans to die from firearms.)

No, what’s extreme is the position taken by the NRA, and by all those who either agree with the NRA or allow themselves to be intimidated by the NRA.  What’s extreme is taking the right to bear arms as an absolute, so that even weapons that have no legitimate civilian use — self-protection or hunting — must be allowed in a 21st century civilized society.

So why give voice to this “both sides” nonsense?  It’s contrary to the truth, and it’s counter-productive.  It gets in the way of achieving your purposes.

The leadership the American people need on this gun issue will tell it like it is.  It will help our citizenry understand that our toxic, obstructionist, extreme politics is not coming from both sides.  It’s coming from one side that’s gone off the deep end. It’s coming from a side that uses fear-mongering lies and treats politics as warfare.

Helping the American people see this is Job One for you, Mr. President.  It’s Job One because none of the other jobs will get done, or get done right, until enough of the American people see clearly the nature of the force that’s preventing us from meeting our challenges — on the gun issue, and just about every other problem in America that needs addressing.

Appeasing these opponents with bogus even-handedness will not make them any more likely to cooperate with you. The Republicans who do the bidding of the NRA on the gun issue are the same people who made it their top priority in your first term to make you fail. If they budge, it won’t be because you treat them with a respect they don’t deserve but because you’ve made the political costs of their destructive conduct too great for them to bear.

Andy Schmookler, recently the Democratic candidate for Congress from Virginia’s 6th District, is an author whose books include, Out of Weakness: Healing the Wounds that Drive Us to War.