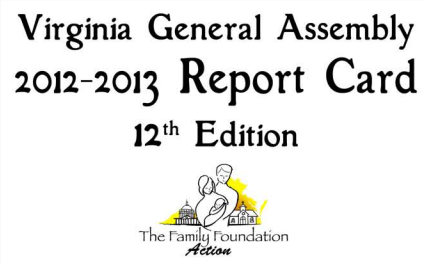 *NO on the nomination of Judge Tracy Thorne-Begland, purportedly because he opposed Virginia’s anti-gay-marriage amendment, but in reality because he’s gay.

*YES on demolishing the wall between church and state by allowing for sectarian prayers at any public government meeting.

*NO on any state funding for Planned Parenthood.

*NO on ratifying the Equal Rights Amendment.

There’s plenty more, which you can see here. Note that almost none of this has anything to do with actually strengthening families, for instance helping parents and their kids get jobs, healthcare, a high-quality education, etc. Instead, it’s mostly highly divisive stuff that’s pretty much straight out of Pat Robertson’s and Ken Cuccinelli’s “social conservative” (e.g., anti-gay, anti-women’s-right-to-choose) agenda.

So, which legislators scored the highest (aka, the most far right) on this scorecard, and which scored the lowest (the most progressive)? Frighteningly, the two Republican candidates for Attorney General, Mark Obenshain and Rob Bell, both received 100% scores from this extreme organization. They were joined at 100% by people you’d expect to be there: Sen. Dick Black, Sen. Steve Martin (a GOP candidate for LG this year), Del. Scott Lingfamfelter (ditto), Del. David Ramadan (this guy actually represents an Obama district, believe it or not!), etc. No Democrats, of course.