This is not a comprehensive list, just a few “winners” and “losers” that jumped out at me from the Republican Party of Virginia’s 2013 convention a little over a week ago (feels like an eternity, though, doesn’t it?). Enjoy!

1. Whoever wins the Democratic nomination for Lt. Governor (Aneesh Chopra or Ralph Northam). With the RPV convention picking lunatic/extremist EW Jackson, it now looks like whoever gets the Democratic LG nod should cruise to victory in November.

2. The rest of the Democratic ticket. Bottom line: Republicans just nominated an extreme ticket that is far, far out of the mainstream of Virginia public opinion on issue after issue. Frankly, if we can’t beat these wackos, it will only be because we run incompetent/inept campaigns. Because the fact is, Republicans just handed Democrats a huge gift, on a silver platter, and all that good stuff. Now we’ve got to take advantage of it.

3. The 8,041 (down to something like 4,745 by the last ballot) hard-core right wingers who got their way at the convention. Of course, the victory might very well be a pyrrhic one, but for the time being, it’s still a victory.

4. Teiro Cuccinelli. I’m told that her ad was aired over and over at the convention as time filler when the “organizers” (using the word very loosely) couldn’t get their act together.

5. John Fredericks. His predictions may have been way off (see “losers” on the “flip”), but I’ll give him tremendous credit for live broadcasting the entire convention, filling the air entertainingly for hours while pretty much nothing happened, and for being enjoyable to listen to even if I didn’t agree with him.

6. Ben Tribbett. Not only did he provide astute, accurate analysis and predictions on John Fredericks’ broadcast, he also conducted a bunch of video interviews, had a camera crew shooting video of the speeches, and basically set the gold standard for how to cover a state party convention.

1. Rob Bell: Yeah, he lost. But he BARELY lost to Mark Obenshain, even with the last-minute endorsement by Ken Cuccinelli of Obenshain.

2. Mark Obenshain: Yeah, he won. But he BARELY won, even with the last-minute endorsement of Ken Cuccinelli. To put it mildly, not exactly a show of strength among core party activists. “Meh” at best.

3. Bill Bolling: He’s got to be laughing his butt off about this, as he was 100% correct that the results of a convention would be disastrous. Do moral victories count in politics? Well, Bill Bolling still won’t be governor, but it’s quite possible that his hated rival, Ken Cucinelli, won’t be either.

1. Ken Cucinelli. Whatever he hoped to gain coming out of this convention, it looks like it didn’t work. Since then, media coverage has been focused almost totally on the insanity and extremism of EW Jackson – and to a lesser extent, Mark “Make Miscarriage Illegal” Obenshain. Now, the question for Cuccinelli is whether he can get back to his variant on Bob McDonnell’s 2009 strategy, which was to focus on jobs and the economy, even with two outspoken wackos on the ticket with him. Good luck with that, I guess, but meanwhile, Virginia Democrats are savoring every minute of it!

2. Tom and Jeannemarie Davis. I never understood why they thought that formerly liberal/moderate Republican Jeannemarie had a snowball’s chance in hell of winning at a convention composed of the hardest of hard core right wingers. I figured that Tom Davis was an astute political analyst and must know something I didn’t know. Instead, it was a total debacle. Not only did Jeannemarie get humiliated, she then endorsed the lunatic EW Jackson – the candidate who’s arguably furthest from her ideologically – apparently out of spite. In sum: no clue, no class, no political future for the Davises. 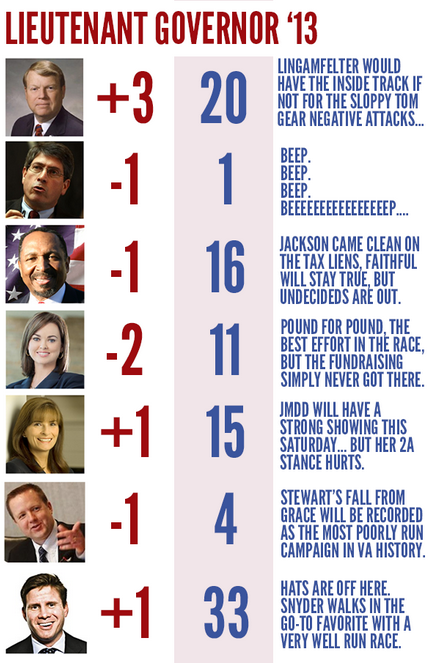 3. Democracy. As I wrote in my live blog of the convention: “pproximately 8,000 Republican delegates now voting to nominate their LG and AG candidates. To put that in perspective, in June 2009, Democrats saw 319,168 voters turn out in their primary for gov, LG, and AG. In 2005, Republicans had 175,170 voters turn out in their statewide primary. So, by moving to a convention, Republicans have reduced the number of voters selecting their nominees by about 95%. Congratulations, guys, that’s real dedication to democracy and grassroots politics right there! (snark)”

4. Pete Snyder: I was thinking about putting Snyder in the “mixed” category, but Ben Tribbett’s post on the crazy/absurd amount of money Snyder spent ($644.48 per vote; the equivalent of around $30 million to win 50,000 votes, as Aneesh Chopra or Ralph Northam will need to win the Democratic primary on June 11) convinced me to move him to “loser” status. Also, the bottom line is that despite all that money (who knew bbq could be so freakin’ expensive?!?) he spent, Snyder lost the nomination to loony-tunes EW Jackson, who spent 9% as much money per vote as Snyder. Great bang for the buck there by Snyder, huh? (not) Making matters worse, there was a LOT of controversy coming out of the convention concerning who did what exactly in terms of (claimed) endorsements in the closing minutes (specifically, Snyder was reported to have claimed an endorsement by Corey Stewart, which Stewart responded to by parading around the convention with EW Jackson, hands raised in the air). Still, Snyder is (possibly) alive politically, obviously hoping – not completely without merit – for a total EW Jackson meltdown that forces him from the ticket, one way or the other. At that point, Snyder would probably be on the short list to replace Jackson. At least, Snyder hopes that’s the case…

5. RPV Chair Pat Mullins. Seriously? That’s the best you could do organizing a convention? The thing starts an hour late, there aren’t enough machines to read ballots, and you end up with interminable (and inexcusable) delays for hour after hour, as nearly half the delegates – bored out of their minds, restless, throwing paper airplanes around the convention center – say “we’re outta here” before the final ballot. Then, you end up with the nomination of a complete freak as your LG candidate. Total, spectacular #FAIL on all levels.

6. Bob McDonnell. Weighed down by scandal, he couldn’t even manage to get his hand-picked heir apparent nominated for governor, as they had agreed to in 2009. Then, he was widely criticized at the convention for his transportation package, which right wingers see as a massive tax increase, sellout of wingnut principles, blah blah blah. Finally, the nomination of EW Jackson reduces McDonnell’s chances of even seeing a Republican succeed him as governor. Not a good day for Bob McDonnell, all things considered – and certainly not how he ever wanted this to play out.

7. Republican bloggers’ and commentators’ convention predictions. Let’s start with the final Bearing Drift “Big Line” forecast for Lt. Governor. Go down that list: they were wrong, and in many cases wildly wrong, on just about everything. Let’s start with the one they got right: Steve Martin, who was eliminated in the first wrong. The problem is, the other candidate eliminated in the first round was Jeannemarie Davis, who Bearing Drift predicted would “have a strong showing this Saturday.” Suuuuure…I guess if you define “strong” as getting unceremoniously booted in the first round of balloting. On the other end was the prediction that Pete Snyder was the front runner, by a wide margin. Instead, in the first round of balloting, Snyder finished fourth, behind Corey Stewart. With regard to Stewart, Bearing Drift had him barely ahead of Steve Martin, having supposedly just completed the “most poorly run campaign in VA history.” Instead, Stewart made it into the final three, just barely behind Pete Snyder (both Stewart and Snyder were wayyyy behind EW Jackson). Oh, and with regard to Jackson, Bearing Drift had him just 1 point ahead of Jeannemarie Davis, and behind both Scott Lingamfelter and Pete Snyder. Nice job.

Let’s not just pick on Bearing Drift, though, as conservative radio talk show host John Fredericks’ predictions were off base all day regarding the LG race. Basically, Fredericks kept arguing that there was NO WAY that EW Jackson would get more than 50% of the vote (wrong!). He also kept stating that Ken Cuccinelli didn’t want Jackson and would/should throw his weight behind Pete Snyder. So much for any of that. Note that Fredericks was mostly conducting this argument with Ben Tribbett, whose predictions were highly accurate (he basically called it for Jackson way before the end) the entire day. Also, remember that right-wing pundits and bloggers were the same people who were confident that Mitt Romney and George Allen would win last November. Heck, Pete Snyder and his closest blogosphere allies were predicting that wildly false outcome (as were Dick Morris, Karl Rove, etc.) up until the last minute. Must have been those “skewed” polls, huh? 😉 So…how are President Romney and Senator Allen doing these days? LOL

P.S. Why anyone who denies overwhelming scientific and empirical evidence would be taken seriously about anything – on any subject – is beyond me.