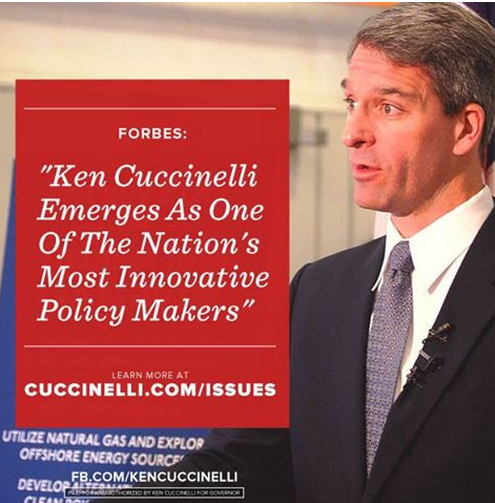 I saw that Ken Cuccinelli posted this image on his Facebook page, claiming that Forbes Magazine called him “one of the nation’s most innovative policy makers.” Of course, this being the guy who conveniently “forgets” things he doesn’t want to remember (or voters to pay attention to), perhaps it’s not surprising that Cuccinelli would “forget” who wrote those bizarre, laughable words. Fortunately, we have a better memory than Cooch does. On May 17 we wrote about the author of that pile of steaming horse manure.

I was curious who the author of this bizarre op-ed (Peter Ferrara) was, since the only identification provided on Forbes is the unhelpful, vague line: “I cover public policy, particularly concerning economics.” So, to “Teh Google” we go: who is Peter Ferrara exactly? Here are a few highlights from his Wikipedia entry:

*At age nine, he was “transfixed while watching television as Barry Goldwater stormed the 1964 Republican National Convention.” That was the convention where Goldwater uttered the infamous line, “extremism in the defense of liberty is no vice…moderation in the pursuit of justice is no virtue.” That was Goldwater’s political philosophy, and it’s Cuccinelli’s as well, nearly 50 years later. Goldwater, by the way, went on to lose in a landslide of epic, historic proportions. We can only hope the same thing happens to Kookinelli this year in Virginia.

*”His senior law school thesis evolved into the debut hardcover publication by the libertarian Cato Institute in 1980, Social Security: The Inherent Contradiction.” Ferrara’s big idea back then: privatize Social Security. Ferrara himself called it “the craziest idea in the world,” and he was certainly right about that at least!

*He “founded the Virginia chapter of Club for Growth,” a radical, anti-government group which has “more than 9,000 members, dominated by Wall Street financiers and executives.”

*He “took money from erstwhile lobbyist Jack Abramoff to write op-ed pieces favorable to Abramoff clients.” As if that’s not bad enough, “Ferrara did not disclose which pieces he was paid to write, but Business Week noted that he wrote favorable articles in the Washington Times about the Northern Marianas Islands and the Choctaw Indian tribe, both Abramoff clients.)” That’s about as sleazy as you can get. No wonder he’s supporting the corrupt right wingnut Ken Cuccinelli.

*”In April 2011, Ferrara became senior fellow for entitlement and budget policy at The Heartland Institute.” What is the Heartland Institute? Well, it spreads climate science denial, for one thing, including running “a digital billboard ad campaign in the Chicago area featuring a photo of Ted Kaczynski, (the ‘Unabomber’ whose mail bombs killed three people and injured 23 others), and asking the question, ‘I still believe in global warming, do you?'” Also, “In the 1990s, the Heartland Institute worked with Philip Morris to question the link between secondhand smoke and health risks.” The group is funded by the ExxonMobil, the Koch brothers and other right-wing groups with strong ties to polluters. Yes, the Heartland Institute’s as scum suckingly bad as they come.

So…THAT is the wackjob who wrote the words Ken Cuccinelli is attributing to Forbes Magazine. Now, I will say that Forbes is responsible for giving Ferrara a forum, just as the Washington/Kaplan Post allows Jennifer Rubin and George Will to disgrace its pages. But if Jennifer Rubin or George Will says something nice about Kookinelli, does that mean “The Washington Post” said those words? I don’t think so. Same thing with Forbes Magazine. Seriously, this isn’t that hard to understand, and I’m pretty sure that Ken Cuccinelli understands it. In this case, what he’s doing is clear: trying to mislead voters into believing that Forbes Magazine is praising him, when that is most certainly not the case. Nice try, though.