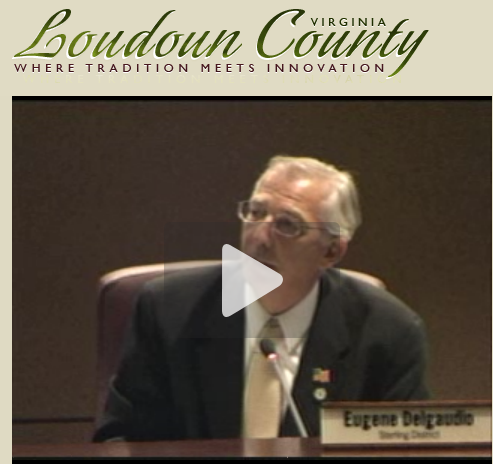 The following press release is from the Loudoun County Democratic Committee. To view video of last night’s meeting, click here or on the image.

Last night, the Loudoun Board of Supervisors voted to censure Sterling Supervisor Eugene Delgaudio and strip him of most of his power and authority as a Supervisor, including defunding his office and staff aides. This action came one month after a Special Grand Jury investigating Delgaudio issued a scathing report citing many improper and unethical actions by Delgaudio, and ten months after the original allegations of misconduct became public.

While all of Loudoun can be grateful the Board finally took action against Supervisor Delgaudio, in light of the evidence revealed by the Special Grand Jury, it is important to remember two key facts:

1. The only reason the allegations against Delgaudio came to light was because of excellent reporting by Caitlin Gibson, the Loudoun reporter for the Washington Post, who broke the story and made it front-page news. Had this story not gone public, the behavior that Mr. Delgaudio was censured for would have been allowed to continue, unchecked, by his fellow Republican Supervisors. In fact, Chairman Scott York became aware of the initial allegations against Delgaudio 16 months ago and essentially swept them under the rug.

2. In spite of all the calls for “ethics” from the dais last night, this Republican Board still has not ratified a code of ethical conduct. Each Supervisor continues to decide, for themselves, what is and is not ethical. The Board of Supervisors needs to sign an ethics pledge at their first meeting in September to help ensure that misuse of public assets and other abuses of power do not happen again. (see here)

It is good that Mr. Delgaudio was censured, but the culture of non-transparency encouraged by this Board — and the potential for corruption that breeds — remains intact. It is a sad day for Loudoun when this kind of action becomes necessary, regardless of your partisan preferences, and we hope the Board will change its ways and prevent these abuses from happening again.