“Mr. Chairman, the unrealistic 302(b) allocation given to the subcommittee has put you and the subcommittee in an impossible situation. As a result of that allocation, the bill before us today is unacceptable.  How can we take seriously a document that zeros out many important programs? By our count 20 programs and agencies are zeroed out. Coming on top of the fiscal year 2013 Sequester this bill, if enacted, would do real damage to scores of programs.

“I recognize Mr. Chairman the difficulties you faced in crafting this bill but what we are seeing today is the bitter fruit of the Ryan Republican budget. The nearly 19 percent overall cut to the bill has turned it into the Sequester on steroids, with the deep cuts made in part to pay for the spending in the Defense, Homeland Security and Military Construction bills now passed by the House.

“The list of cuts in this bill is long and deep. The Fish and Wildlife Service alone would be cut $400 million below this year, an astonishing 27% reduction. No dollar amounts are listed for numerous programs, leaving it to the agency, rather than the subcommittee, to make the painful choices. These cuts would do real damage to a host of fish and wildlife programs that are vital to the survival of numerous plant and animal species.

“The Land and Water Conservation Fund would be zeroed out, a first for the program.

“The late inclusion of an emergency designation for wildfire suppression has staved off even deeper cuts in the bill but even this designation is not without controversy.

“In years past Mr. Chairman, you have protected Native American programs from cuts. Unfortunately, that is not the case this year. That is why it is surprising to me that even as these cuts are made, increases are provided for oil and gas programs. Instead of rejecting the Administration’s proposed onshore oil and gas inspection fee, couldn’t we have asked this industry, which is so highly profitable, to share in the sacrifices necessitated by the bill that provides the public lands from which they get much of their revenue?

“And then there is EPA.  I wish I could say that I am surprised by what has been included but I am not.  The agency is cut by over one-third (- 34%).  This is on top of the 20% the agency has been reduced since fiscal year 2010. Brownfields projects are eliminated. Alaska Native Villages water infrastructure assistance is eliminated.  US Mexico Border water infrastructure is eliminated. The Clean Water and Safe Drinking Water programs may as well be eliminated given the comparatively small amounts they received in this bill.  As if going after the agency’s programs were not enough, the bill takes a jab at the brand new EPA Administrator and cuts her immediate office by 30%.

“One area there seems to be no shortage of in the bill is the special interest riders and funding limitations. The polluters, grazers, and snowmobilers are taken care of. These sorts of provisions have become the new earmarks. By our count there are 31 such special interest provisions in the bill, with 13 of them being new this year, and all of them harmful to our environment.

“I regret that the subcommittee’s woefully inadequate 302(b) allocation has led to this bill. The only consolation I can take is that with its funding, this bill will never become law.

“Mr. Chairman, I appreciate our working relationship but this is a bad bill. Thank you.”

For a list of the 20 programs and agencies eliminated in the bill, please visit: http://moran.house.gov/sites/m…

Video: As VA GOP Argues Endlessly Over Its Method of Nomination, State Central Committee Member Complains About “the VICIOUS incivility and attacks that have... 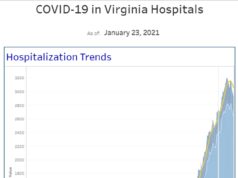 VA Del. Danica Roem Responds to Opponent of Her Afterschool Meals Bill: “When will it stop? When we feed every kid”