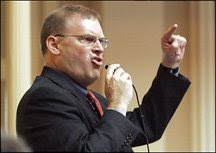 Tis the season for more absurd remarks by Republican members of congress, and Rep. Morgan Griffith (9th District) didn’t waste any time. While recently visiting Tazewell, Griffith told a crowd of supporters during lunch that if 95 percent of the Environmental Protection Agency’s (EPA) employees were classified as ‘non essential’ during the federal government shutdown in October then “they should be able to cut 15 percent.”

Indeed, the august Griffith claimed that he intends to introduce legislation during the next session of congress that would cut the EPA’s staff by 15 percent even though he concedes that “I don’t want to mislead anyone, I don’t think it will pass in the Senate and maybe not the house but we are going to ask for their staff to be cut by 15 percent.” In essence, then, Griffith’s legislative gamble will once again waste legislative time, energy, and taxpayer dollars.

It is interesting, however, that Rep. Griffith doesn’t also believe, by implication, that the approximately 350,000 civilian Department of Defense employees who were considered “non essential” should be reduced by 15 percent. According to Griffith, then, EPA employees are essentially worthless, reflecting a widespread and fundamentally flawed view by many Republicans on which federal agencies are and are not worth their share of taxpayer dollars.

But if Griffith’s standard of reducing the number of individuals working for the government who are draining the U.S’s budget is to be applied consistently, then he might think about firing himself and a number of his Republican Party colleagues. According to a recent Standard and Poor’s analysis, the recent government shutdown cost the U.S. $23 billion in gross domestic product. That is, the government shutdown cost the U.S. almost three times the total 2013 fiscal year budget of the EPA ($7,901,104,000). Those darn facts are terrible, aren’t they?

If there is any unnecessary drain on the U.S. economy, it can easily be found in the U.S. Congress among a political party that has made economic homicide an essential part of its political tactics. The carelessness and ignorance of the Republican Party in congress is the real threat to the U.S.’s economic success, not the EPA, and at the forefront is Virginia’s very own Rep. Morgan Griffith.