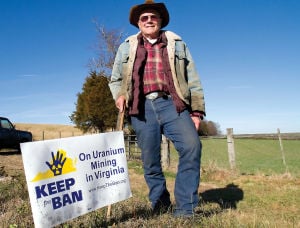 In case anyone needed additional evidence that Virginia Uranium Inc. (VUI) hasn’t given up on lifting Virginia’s moratorium on uranium mining, Exploration Permit 90484EX was renewed on November 13th, 2013 and will remain in effect until November 20th, 2014. The permit was first issued to VUI in 2007.

With billions of dollars worth of uranium ore deposits on the line, it’s not surprising that VUI has taken a long-term approach to achieving its goal of lifting Virginia’s ban on mining uranium. Once believed to be an inevitable short-term outcome, VUI has had to settle for waiting at least another 4 years before there is a serious chance of mining uranium in the state.

For many residents of Southside Virginia, VUI has been a symbol of the tension between capitalism and democratic governance in our modern era. While some polls have shown a close split among Virginians who favor or oppose uranium mining, no polls that I am aware of have been targeted towards the people of Southside Virginia, where the uranium mining would actually take place. With all due respect to Virginians living outside the Southside, your backyard isn’t the one where the process of uranium mining will take place (at least, not yet).

As long as a majority of Southside Virginians wish to retain the moratorium on uranium mining and the process remains open to considerable risk, the question about whether or not the moratorium should be lifted is moot. The communities that will be most directly affected by this decision should be the ones who have the final say in whether or not the process is started. Isn’t this a large part of what our democratic form of government is about?