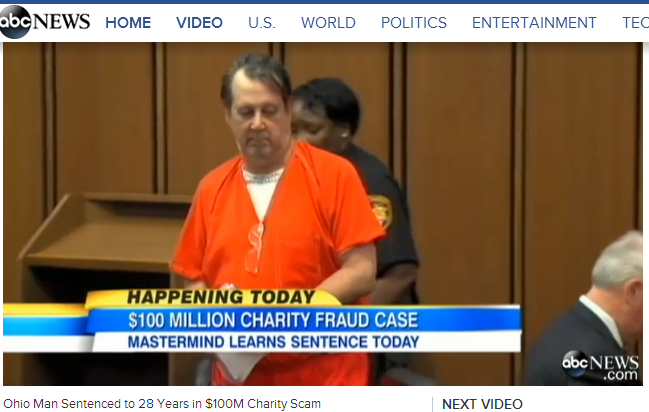 An Ohio judge today sentenced the mastermind of a $100 million charity scam, who had become a major Republican campaign donor, to 28 years in prison.

John Donald Cody, who operated under the pseudonym Commander Bobby Thompson, appeared before the judge with a bushy grey beard, dressed in an orange jump suit. Gone were his trademark pompadour hairstyle and stylized mustache he wore when posing in photos with prominent politicians, including former President George W. Bush and House Speaker John Boehner…

…Cody spoke briefly before hearing his prison sentence and being slapped with a fine of more than $6 million for overseeing a bogus charity called the U.S. Navy Veterans Association, which preyed on people’s sympathy for American military veterans at a time of war. He offered no apology.

So, does this guy’s name – his fake name, that is, not his real one – ring a bell? If not, it should, because Virginia Attorney General Ken Cuccinelli was closely connected to the guy back in 2009. A few quick links to joggle your memory chips.

*Shannon connects Cuccinelli campaign promise, donation (“‘I think the timing is devastating,’ Shannon said in an interview. ‘You receive huge contributions, and then you stake out policy positions. I’m not in government any more. I’m not a prosecutor any more. It’s not for me to say if something illegal happened. But I’m just stating the facts.'”)

*The Commonwealth of Virginia vs. Ken Cuccinelli

Starting to get the picture here? So, the main thing I don’t understand is why this quid pro quo, pay-to-play scandal wasn’t a huge issue in the 2013 gubernatorial campaign. I mean, Johnny Williams was bad, but this is much, much worse if you ask me…