While Virginia Republicans grow their beards, act like stupid frat boys (or actually 7th graders), and generally treat the entire issue of Medicaid expansion like a joke, back in the real world, these Republicans are hurting hundreds of thousands of Virginians. Actually, they’re not just hurting them, they’re doing far worse than that, at least according to the paper, Opting Out Of Medicaid Expansion: The Health And Financial Impacts, in the publication Health Affairs, “the leading journal of health policy thought and research.”

That’s right, Republican obstinacy and “Obama Derangement Syndrome” is not just hazardous to people’s health, it’s deadly. Here in Virginia, you can see the results in the table below (click to “embiggen”). That’s right, we’re talking about 266-986 “needless deaths” in Virginia every year – that’s as many as 19 Virginians every week – dying needlessly due to one reason only: Republicans’ obstinate, cold-hearted, ideologically-and-politically-driven refusal to accept our own tax dollars back and expand Medicaid in Virginia to nearly 300,000 people who would qualify. It’s beyond appalling, bordering on pure evil. And no, corporate media, it’s not “both sides,” it’s one side only – Speaker Bill Howell and company. 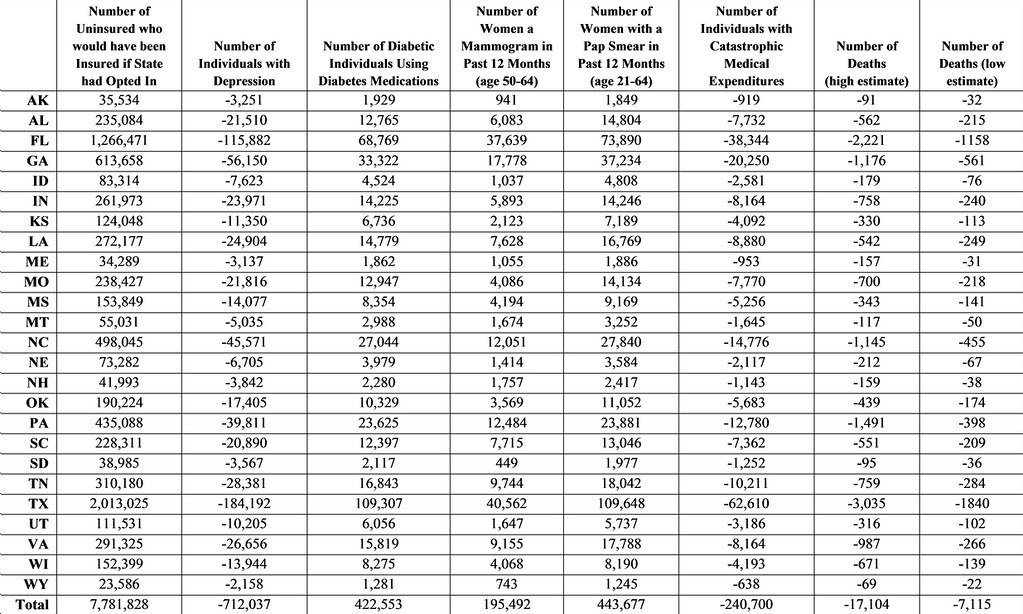 Oh, and one guess where the the Virginians who most desperately need expanded access to Medicaid live? That’s right, in some of the “reddest” areas of Virginia politically speaking. Which means, yet again, that we have a case of Republicans politicians not only failing to represent the best interests of their constituents, but actively working to harm those constituents. Of course, one could ask why those constituents keep voting to reelect people who repeatedly, on just about every issue, fight against them. And the answer would be…actually, just read “What’s the Matter with Kansas?” and you’ll get the idea (in short, Republicans are masters at riling people up against the “other,” at fostering fear and ignorance – and then preying on it, etc.).