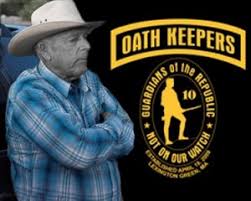 Kathleen Parker, one of my favorite GOP columnists at the Washington Post, wrote a cautionary column last Sunday asking fellow Republicans to be more careful in picking their allies.  She was of course referring to the enthusiastic backing of rancher Cliven Bundy, who refused to pay grazing fees for his cattle on federal land and threatened Bureau of Land Management agents with armed resistance.  At first, delighted tea partiers and their conservative fellow travelers in Congress, state governor’s mansions, and on a major TV network rallied around Bundy.

But it didn’t take long for Fox’s Sean Hannity, Senator Rand Paul, and Governor Rick Perry to walk back their support when Bundy claimed that blacks were better off under slavery.

Although Parker handled it with a light touch, making fun of the trio of embarrassed Republicans and tried to make it seem like flawed logic for liberals to conclude that the Republican Party was racist.  No, she bravely soldiered on.  This was a failure to vet Bundy properly, and she made the call that her party needed to do a better job of choosing their friends.  That’s all.  Merely a zany and embarrassing misunderstanding.

It was a nice try from an embarrassed and decent but loyal Republican.  But as the ever perceptive Dana Milbank argued in another column on the editorial page, Republicans, while probably not all racist, should not have been at all surprised by Bundy’s racism.  He pointed out the long history that the anti-government, anti-tax fringe movement has had with racism. He correctly cited their roots in the 1970s Posse Comitatus Movement and the 1990s Montana Freemen Movement, among others.  He also pointed out that Perry, especially, has “flirted with secessionists” in Texas.

I would argue, though, that Milbank, good as his article is, does not go far enough.  Not only shouldn’t Republicans feign shock when the extremists they support issue statements that blow up in their face, the GOP actually has to stop enabling extremist rhetoric and violent action. To do that, they actually have to recognize it and condemn it more often, not just when it boils over into such blatant racism that it embarrasses them.  They have to stop with the dog whistle racism and flirtation with anti-government violence too.  Currently, they are sitting on a dangerous tinderbox ready to blow.

Right now it seems there is no position so extreme, no ideology or action so incendiary when it comes to anti-government sentiment that Republicans can condemn it.  Question: could you imagine Bob Dole, Dwight Eisenhower, even William Buckley, actually approving of an armed resistance to paying a legal fee?  It wouldn’t have happened even as recently as the 1980s.

But the tea party aligned politicians, allied with a toxic brew of birthers, right wing anarchists, and militia groups have lost all sight of the fact that the federal government is actually a legal and legitimate entity.  At this point, many of the groups from whom they are seeking support have long ago fallen off the far right fringe into lunacy where they do not recognize any legal authority.  And they are increasingly armed and dangerous.  Indeed, they include a revival of modern day militias and something called the sovereign citizen movement, which Bundy was part of.  Here is what one expert, J.J. MacNab, an author who has studied them for a decade, has said during a CBS 60 Minutes interview:

“Sovereign citizen, in its simplest form, believes that he is above the law,” she explained.

MacNab has testified before Congress and is writing a book about the movement. “He has a twisted sense of history and he thinks that people who lived in the 18th century were free of all legal constraints. And they want to return to that time now,” she said.

And according to Daily Beast:

Many sovereign citizens may not be aware of their philosophy’s origins. The Southern Poverty Law Center says the movement is “rooted in racism and anti-Semitism” and it has traditionally appealed to the economically desperate. In the 1980s, white supremacists and anti-Semites were drawn to the movement by a shared defiance of the Jews they believed were controlling the government and financial institutions. The group’s early members believed that by granting citizenship to African Americans, the 14th Amendment made blacks permanently bound to government rule and thereby ineligible for sovereign citizenship. Today, there’s a significant number of black sovereigns.

The basis for the modern-day sovereign belief system is a conspiracy theory that is as outrageous as it is confusing. Sovereigns believe that there are two government systems existing in the United States: “common law,” which the Founding Fathers established and under which sovereigns are free to break laws and evade taxes as they wish; and “admiralty law,” which secretly replaced common law at some disputed time in history-maybe during the Civil War, maybe when the U.S. went off the gold standard in 1933, who knows-and makes the sovereigns slaves to the government. Judges, they believe, are fully aware of the admiralty-law takeover but pretend to be oblivious to keep sovereigns indentured to the government.

Generally, authorities believe most sovereign citizens don’t resort to violence. They’ve been dubbed “paper terrorists” because they prefer clogging the courts with filing legal briefs, liens against the property of sheriffs and prosecutors, and tons of paperwork.  That’s how they first came to my attention.

When I worked at Treasury, I used to get a fair amount mail from sovereign citizens. You could tell when a letter came from them because the return address on the envelope would always say “The Republic of Florida” or Texas or whatever state the person lived in.  And the letters were always handwritten.

One of the hallmarks of their conspiracy theories is that if they file the right combination of papers (usually thousands of documents) using the right format and the right colored ink, they will get millions of dollars in money, reimbursing and redeeming them from their illegal indentured servant status in which the federal government has placed them at birth.  Needless to say, their letters and envelopes were colorful.  And I usually turned them over to the Secret Service, as I was instructed to.

There’s a whole cottage industry with websites offering potential sovereign citizens forms to fill out and instructions on how to do it so they can collect their millions of bucks.  People attracted to the movement often pay hundreds of dollars to learn how they too can redeem themselves from the federal government’s straw man status by renouncing their U.S. citizenship and declaring themselves sovereign citizens, subject to no higher authority than “common law.”

Although most sovereign citizens are more nuisance than threat, they are increasingly turning to violence.  In 2010, Joseph T. Kane and his father shot a police officer in West Memphis, Arkansas when they were pulled over at a traffic light.  Convicted Oklahoma City bomber Terry Nichols was a member of a sovereign citizen group.  Here is a link to more examples of the mayhem they’ve created and an in depth explanation of their theories.

While most tea party members are not sovereign citizens by a long shot, they are increasingly being drawn into more anti-government, anti-tax and pro-gun positions that border the sovereign citizen movement’s beliefs and world view.

Republican-controlled state legislatures are implementing increasingly more restrictive voter identification laws to ostensibly protect their states from voter fraud.  While some of them may be sincerely concerned about the integrity of the election process, these efforts send a message to already dissatisfied rank and file tea partiers unhappy with the results of elections that don’t go their way that they might have lost due to voter fraud.  It’s a short jump from that to concluding that the election was stolen from them.

Although for the most part, these are voter suppression ploys to prevent those who wouldn’t vote for them from getting to the polls, the rhetoric about voter fraud serves to increasingly delegitimize election results with possibly incendiary results among their less stable followers.  The talk of voter fraud and the birther movement constantly harping on President Obama’s birth certificate were all efforts to make his election seem illegitimate.  It is a short step from that to undermining trust in elections, government, and fairness.  A lot of the people in the sovereign citizen movement share something else with a lot of tea partiers.

They are not wealthy, nor well-educated.  They have been manipulated by the moneyed interests, like the Koch Brothers, but they do not share that wealth.  Many actually are struggling financially.  To make them feel disenfranchised from the government creates exactly the anger that can push them over from the tea party to the sovereign citizen movement.

The ideology that the federal government is not legitimate and that their vote has been stolen from them is the powder keg.  A Republican Party so irresponsible that it encourages such rhetoric is all it takes to light the fuse among the tea party faithful and turn them into sovereign citizens.  So my question and my challenge to Republicans is this.  Despite our real political differences, can we lose the fiery anti-government rhetoric and engage in reasonable dialogue and damp down the fear, loathing and paranoia at your margins?