RICHMOND — Today, in a letter addressed to Speaker Howell, concerned citizens of the Commonwealth gave the Virginia House Republicans a five-million dollar choice; “either spend $5 million a day to insure 400,000 Virginians, and create 30,000 jobs, or use this as a down payment to the Tea Party extremists that are holding Virginia's budget hostage.”

“The Virginia House Republicans recent erratic behavior where they hastily rejected the Governor's budget without giving it even partial consideration is not only unfair to the 400,000 uninsured Virginians seeking a close to the coverage gap but unfair to the Commonwealth,” said DPVA Spokesperson Ashley Bauman. “It's our hope that Speaker Howell, Delegate Cox, Delegate Jones and their colleagues observe the discussion happening today in Senate Finance and that they learn what it means to govern for the people in their districts.

“It's time for House Republicans to come to the table and work with their colleagues in the other chamber on a solution to pass a budget that closes the coverage gap for 400,000 working Virginians.” 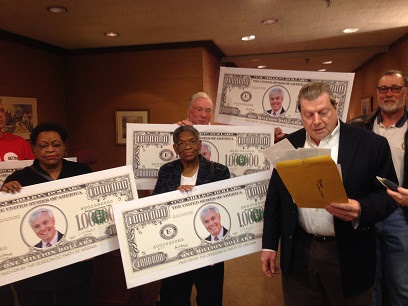 Text of the letter below

We are writing you today to address a very serious issue facing the Commonwealth, closing the health care coverage gap for 400,000 working Virginians. Now, we understand your hesitation to push your caucus to rise above the Tea Party chatter as it might hinder your ability to pass other meaningful legislation — well, let's be honest, the Virginia House is where most good things have gone to die this year.

That being said, you now have a rare opportunity to redeem yourselves. We — concerned citizens of the Commonwealth are presenting you with five million dollars in Speaker Howell bucks to use at your discretion. We know this seems like a lot of money in one lump sum but let us assure you — this is nothing compared to the over $450,000,000 we've lost since the beginning of session.

House Republicans can either spend $5 million a day to insure 400,000 Virginians, and create 30,000 jobs, or this can be used as a down payment to the Tea Party extremists that are holding Virginia's budget hostage — the choice is yours.

Concerned Citizens of the Commonwealth