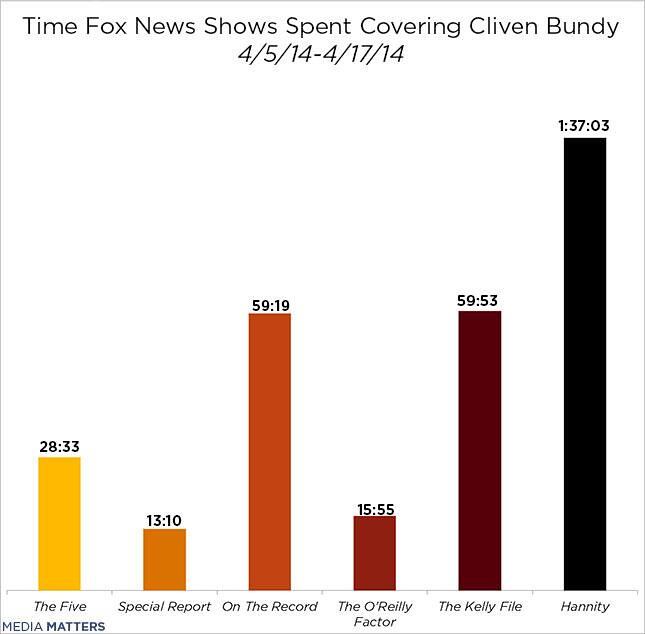 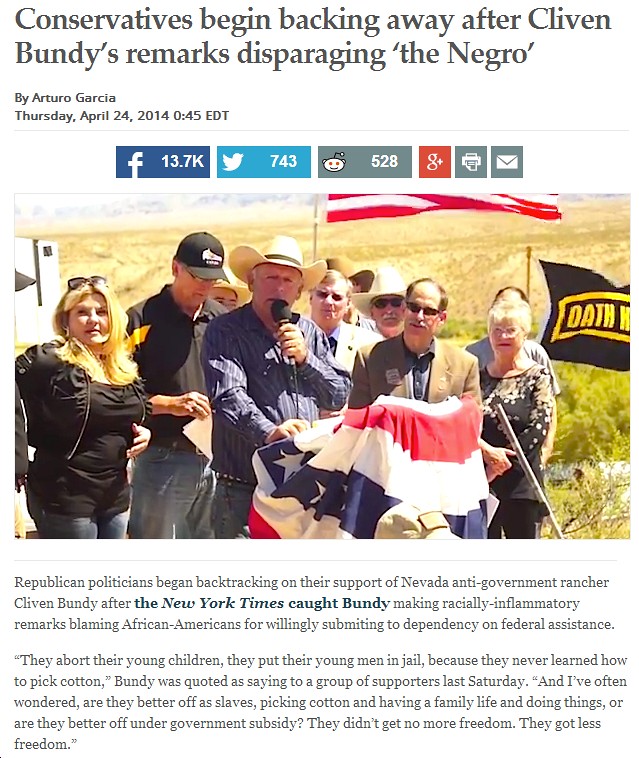 So, let’s get this straight: Cliven Bundy is a “conservative” hero (e.g., to the likes of Sean Hannity, Sen. Ted Cruz, Sen. Dean Heller, Sen. Rand Paul, Texas Attorney General Greg Abbott, Texas Gov. Rick Perry, etc.) when he’s “only” a right-wing extremist – essentially a domestic terrorist along the same lines as Timothy McVeigh – who refuses to obey the law, doesn’t believe he needs to obey federal law, freeloads by grazing his cattle on public land without paying for it, surrounds himself with violent/armed thugs, etc. But while “conservatives” (in quotes because there’s nothing conservative about these people, really) continue to love all that crazy, anarchist, violent, extremist, anti-government stuff, they know that politically, if they keep supporting Bundy now that he’s exposed himself as a vicious racist, their desperate, disingenuous attempts to avoid getting a lower and lower share of the non-white vote in this country will suffer a disastrous setback.

So, yes, expect most “conservatives” to run as fast as they can from good ol’ boy Cliven, based on their own perceived political self interest if nothing else. Except perhaps for unhinged demagogues like Sean Hannity, whose Faux “News” venom-fest panders to exactly the types of people who can’t get enough of Cliven and his ilk. If Hannity doesn’t back off of Bundy after the racist remarks, will that make HIM toxic as well? Will the Republicans he’s endorsed, such as 10th CD Congressional Republican – and likely nominee – Barbara Comstock – stick with Hannity or what? We’ll be watching. Closely.

UPDATE: Even crazy Sean Hannity has backed off of Cliven Bundy. Not because he’s an anti-government extremist, bordering on a domestic terrorist, but because he’s also a raging racist.