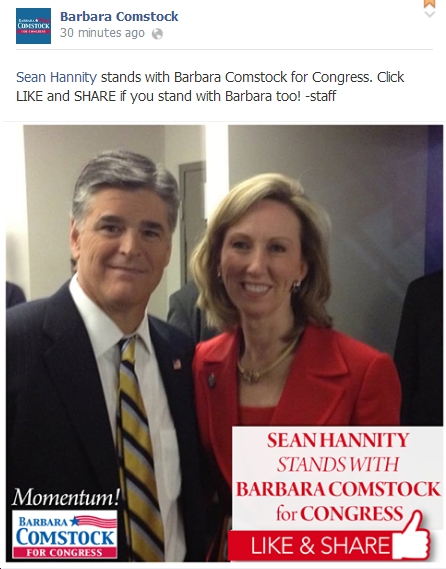 Given Barbara Comstock’s support from Sean Hannity, I was just wondering if Comstock agreed with Hannity that:

*”Anyone listening to this show that believes homosexuality is a normal lifestyle has been brainwashed. It’s very dangerous if we start accepting lower and lower forms of behavior as the normal.”

*”It doesn’t say anywhere in the Constitution this idea of the separation of church and state.”

*”If I was in Congress, I would not vote to raise the debt ceiling.”

*Barack Obama is a secret Muslim (according to Hannity, Obama “did study the Quran, that one of the most beautiful moments in life was prayer at sunset. So, I mean, he does have that background.”)

*”Hannity has repeatedly denied or cast doubt on the existence of climate change.”

*On contraception, Hannity said, “why don’t women like yourself, then, maybe then have an ‘adopt-a-woman’ birth control program? In other words, why should the government be doing it?”

*More on contraception from Hannity: “I won’t have sex, but I’ll be paying for the birth control. Not fair.”

*On torture, Hannity says, “We waterboarded three people…and you know what, I would have done it myself.”

*On House Speaker John Boehner, Hannity says, “I don’t think John Boehner is equipped for the job.” Hannity also says it might be “time for a third party” and complains that Republicans are “alienating the Tea Party with the lies of John McCain and Bob Corker fighting them.”

By the way, I also wonder if Sean Hannity agrees with Barbara Comstock participating in the February 2008 Virginia Democratic Presidential primary to cast a vote for Barack Obama. Would Hannity and Comstock support Democrats voting in the upcoming 10th CD Republican nominating process, perhaps to vote for “Sideshow Bob” Marshall as the potentially weaker candidate for the general election? Inquiring minds want to know. 😉

Sen. @MarkWarner: "I will be shocked if we don't end up with much closer to 20 and maybe even more Republicans supporting this legislation." https://bluevirginia.us/2021/06/thursday-news-climate-change-tipping-points-are-upon-us-draft-u-n-report-warns-bidens-patience-may-have-delivered-a-breakthrough-on-infrastructure-joint-chiefs-chair-milley-schools-ma#comment-5431976070