This would simply be a mildly amusing story if the two leading Republican candidates for the 10th Congressional District – Barbara Comstock and “Sideshow Bob” Marshall – nomination weren’t such right-wing nutjobs. As it is, I still find it an amusing commentary on straw polls’ utility and predictive value – or, more to the point, the complete lack of either of those things. Despite that, candidates go all out to win these things, tout the results when they win, and “dis” or ignore the ones they lose. Anyway, take your pick of the following two recent 10th CD Republicans straw polls, which demonstrate that either Barbara Comstock or Bob Marshall are kicking butt for the nomination. Or not. Or something. LOL 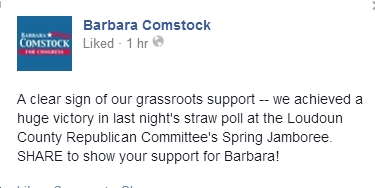 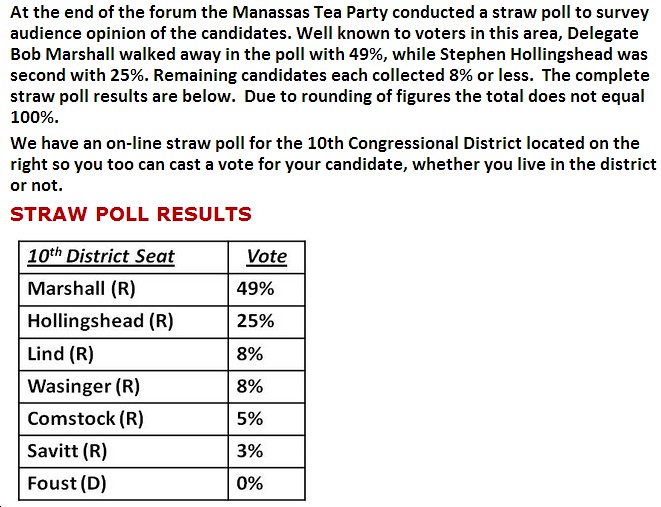 P.S. Whichever one of these teahadists wins the 10th CD Republican nomination, the bottom line is that we need to make sure that neither make it anywhere near Congress. Fortunately, there’s an excellent alternative: Democratic nominee John Foust.

Rep. Rob Wittman (R-VA01) is such a buffoonish clown, it's astounding anyone would vote for him https://bluevirginia.us/2020/09/video-appallingly-dishonest-demagogic-disgraceful-performance-by-rep-rob-wittman-r-in-final-va01-debate#comment-5083427502

Good to see that most Democratic voters plan to either vote in person or return their mail ballot right away https://bluevirginia.us/2020/09/thursday-news-trumps-threats-and-actions-bring-america-to-the-brink-this-isnt-justice-in-breonna-taylor-case-nearly-500-former-senior-military-civilian-leaders-sign-letter-backing-bi#comment-5083420408