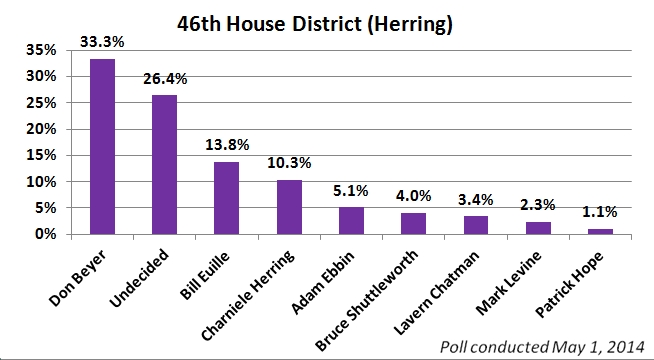 As you may know if you received an automated telephone call (note: calls conducted by Voice Broadcasting), last night Blue Virginia ran a poll of the 8th CD Democratic primary. To date, there has only been “internal” polling by the campaigns, but no public poll of this 10-candidate race to replace Jim Moran in Congress. The lack of public polling was the major reason why we decided to go ahead with our inaugural polling effort. Also, we think it’s important for the media and the voters to know where the candidates stand with just 40 days to go until the election.

Given the limited funds at our disposal, we decided to focus in for now on polling parts of the district in which an 8th CD candidate holds elective office. Thus, we concentrated on: the city of Alexandria, where Bill Euille is Mayor; the 46th House of Delegates district (western Alexandria), which Charniele Herring represents; the 47th House of Delegates district (north Arlington, which Patrick Hope represents; and the 30th State Senate district (about 200,000 residents in south Arlington, eastern Alexandria, Mt. Vernon and Lee Magisterial districts), which Adam Ebbin represents. We’ll roll these results out separately over the next day or so. In analyzing the results, keep in mind that there’s overlap in several of these districts. Also note that we didn’t poll Falls Church or parts of Fairfax County other than Adam Ebbin’s State Senate district. Finally, you can compare these results to the scenarios we presented on April 18. From what I’ve seen of the poll results, Scenario #1 is looking pretty good right now.

Overall, for the entire poll (e.g., not just in Charniele Herring’s House of Delegates district, but in all the 8th CD areas we polled), we had 1,152 likely Democratic voters (these are voters who participated in the 2012 or 2013 Democratic primaries) respond to the first question (note: the poll was automated), “Please rate the likelihood that you will be voting in the Democratic primary for Congress on June 10th.” We then had 831 responses to the question about which candidate they would vote for (note: we didn’t include Derek Hyra or Satish Korpe because the poll only allowed 9 choices, including “undecided,” so we had to drop two).

The results came in late last night, and I’ll be rolling them out over the next couple days. We’ll start with Charniele Herring’s House of Delegates district, with the results displayed graphically (see above), followed by a few thoughts on the “flip.” (Note: there were 174 respondents specifically in the 46th House of Delegates district). The margin of sampling error on this section of the poll is +/- 6.5 percentage points.

*Clearly, this is not good news for Charniele Herring, who the poll indicates receives just 10.3% in her own House of Delegates district, trailing Don Beyer by a whopping 23 points, “undecided” by 16 points, and Bill Euille by 3.5 points. Note that Herring has represented this district for five years (since early 2009), so you’d expect her to do very well here – and she clearly doesn’t…

*Just as clearly, this is excellent news for Don Beyer, who is the clear front-runner in this district. Lavern Chatman is not showing any signs of traction in this district, despite her fundraiser with Oprah Winfrey and the fact that she’s a well-financed candidate who has been communicating heavily with voters (mostly via direct mail, as far as I can determine). Nor are Bruce Shuttleworth, Mark Levine or Patrick Hope, none of whom have been communicating however. The question is whether those candidates have strength elsewhere. On that front, stay tuned for the results from Patrick Hope’s House of Delegates district. 🙂

*Of the 23 voters in the poll who selected Charniele Herring, 20 identified their gender. It broke out 15 women and 5 men, clearly indicating that Herring’s appeal is disproportionately among women. In terms of race/ethnicity, 2 identified themselves as Black/African American, 1 Latino, 1 “rather not say,” and the other 16 White/Caucasian.

*I’ve said this before, but I’ll say it again following this poll. Based on her lackluster campaign, her minimal fundraising (at least as of the 1st quarter of 2014) – and therefore limited ability to communicate with voters – and the fact that she hasn’t shown that she’s ready in terms of national and international policy “chops” to be running for Congress (e.g., her answer in the Mt. Vernon debate on the foreign policy question left much to be desired, to put it mildly!), Charniele Herring should have dropped out a while ago, and should certainly drop out now. She’s obviously got no chance of winning this race, and at this point is only hurting herself for any future political aspirations.

*No other candidate appears to be gaining significant traction in the 46th House of Delegates district, which covers the western part of Alexandria. Adam Ebbin, for instance, is next behind Herring at 5.1%, followed by Bruce Shuttleworth at 4.0%, Lavern Chatman at 3.4%, Mark Levine at 2.3%, and Patrick Hope at 1.1%.